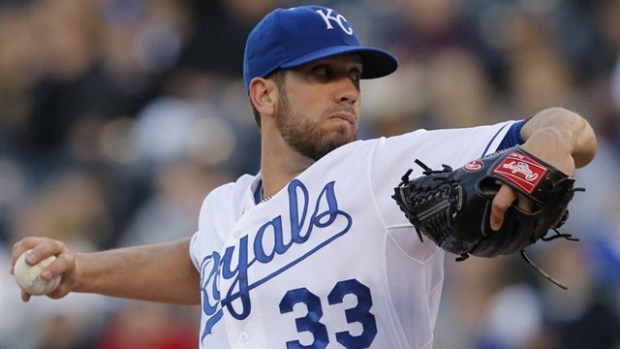 (SportsNetwork.com) - James Shields makes his first start at Tropicana Field as a visitor on Monday when the Kansas City Royals play the first of three games against the Tampa Bay Rays.

Shields spent his first seven years with the Rays before being moved to the Royals as part of a seven-player trade prior to the start of last season. One of the players that went the other way in the deal was righty Jake Odorizzi, who will oppose Shields on Monday.

"He should get a nice ovation for all the great work he's done [at Tropicana Field] in the past," Rays manager Joe Maddon said of Shields. "He helped us become the Rays. He helped, big-time, in the transformation, and not just what he did on the field. What he did among the young pitchers, he was a great leader for the pitching staff."

"A lot of good memories there," Shields said. "I haven't set foot on the mound [at Tropicana] since I got traded, so it's pretty exciting to go back and pitch on that field.

"It'll feel a little weird when I'm warming up, but once I get on the mound, I'll be good to go. It'll be just another game, trying to win a ballgame."

Shields, who beat the Rays the only other time he faced them, has struggled of late for the Royals, giving up 17 runs (16 earned) in his last 25 innings. He absorbed the loss his last time out on Tuesday in Minnesota, as he surrendered five runs (4 earned) and nine hits in five innings to fall to 8-4 on the year to go along with a 3.93 ERA.

Now he'll try to slow down a Tampa team that is among the hottest in baseball. The Rays won for the eighth time in nine games on Sunday, as they defeated Detroit, 7-3.

David Price pitched into the ninth inning to get the win, while Ben Zobrist and Sean Rodriguez each had four hits for the Rays, who have won 10 of 12 and moved within 7 1/2 games of first place in the American League East.

"This is the type of baseball we expected to play," Price said. "I feel like I'm the most complete pitcher that I have ever been right now."

Odorizzi heads to the hill on Monday, as he tries to win his third consecutive decision. He beat the New York Yankees on Wednesday, as he held them to three runs and eight hits in 5 2/3 innings to improve to 4-7 to go along with a 4.18 ERA.

Kansas City failed to take advantage of AL Central-leading Detroit's struggles versus the Rays, as the Royals dropped two of three to Cleveland over the weekend.

The Royals, which took two of three from the Rays earlier in the year, had won four of five before losing the final two in that set and sit four games back of the Tigers in the division.