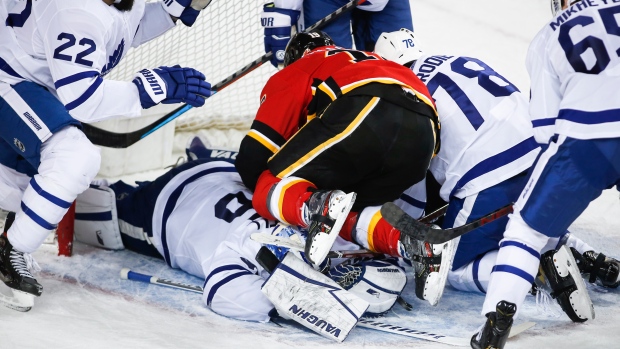 The Maple Leafs’ goaltending depth took another hit on Tuesday when head coach Sheldon Keefe announced backup netminder Jack Campbell suffered a leg injury in Sunday’s 3-2 win over Calgary that will sideline him for “weeks.”

That pushes journeyman Michael Hutchinson into the spot behind starter Frederik Andersen for the foreseeable future. Rookie Joseph Woll is headed to meet the Leafs out west and join their taxi squad after a quarantine period.

Toronto lost former third goalie Aaron Dell on waivers to New Jersey last Monday, a move they felt compelled to make because of salary cap implications. Dell would have been the projected backup in Campbell’s absence if he were still around, but the Leafs will simply have to make do now with what they have.

“That's the game. That's what you go through,” Keefe told reporters on a Zoom call Tuesday, ahead of a game against Calgary. “That’s why you try to set yourself up with as much depth as possible, to deal with whatever might come our way. I do think the way the schedule sets up here now is pretty favourable for us, and for Freddie Andersen's workload. We still have lots of confidence in both Fred and Hutch.”

Andersen will start for Toronto in its rematch with the Flames on Tuesday, and is likely to take the net for both tilts in Edmonton on Thursday and Saturday. After that, the Leafs will be idle until Feb. 4 back at home against Vancouver, and there are no back-to-backs looming until mid-March.

Still, losing Campbell projects to tax Andersen more heavily than the Leafs would have liked. In a perfect world, Keefe would want Andersen to have entire game nights off, as he did earlier this month when Campbell started against Ottawa and Dell backed up, leaving Andersen as a spectator.

Campbell had played well in both his early outings, going 2-0-0 with a 2.00 goals-against average and .923 save percentage.

But now the focus shifts to Hutchinson. Toronto originally traded for the 30-year-old in December 2018, and he toggled between the Leafs and AHL Toronto Marlies for the better part of two seasons before being moved to Colorado last February. He left having appeared in 20 NHL games for the Leafs, with a .900 save percentage.

Hutchinson ended up making the most memorable starts of his career to date for the Avalanche.

Facing elimination in their second-round playoff series against Dallas last summer, Colorado was reeling from the loss of its starting and backup goaltenders to injury. That left Hutchinson to start in Game 5, and he stepped in to record 31 stops in his first postseason victory. Hutchinson backstopped Colorado to another 27-save win in Game 6, before he and the Avalanche fell in Game 7.

Hutchinson became a free agent after that and returned to the Leafs on a two-year, $1.45 million contract in October. Keefe cited that postseason experience as giving Toronto faith Hutchinson can step up again if needed.

“I mean, there’s only one player on our roster that was winning games in the second round of the playoffs last year,” Keefe said. “So I think you know he's coming in here with a different level of confidence than what he had the last time around.”

While the goaltending situation may not be unfolding as Toronto hoped, Keefe remarked the team could be much worse off than it is.

“I think you can look back and I believe there was a point in time where [Hutchinson] won [four] consecutive starts for us [last season],” Keefe said. “He went off to Colorado, and was put in a really tough position in the playoffs and gave them an opportunity to compete and get to Game 7. So, when we look at the depth that we started the season with, we lose Aaron Dell, that takes a hit there of course, but to have someone like Michael Hutchinson and his experience as the third guy, we're in a pretty good place there.”

As it is, Campbell is just the latest in a growing list of injured players for the Leafs. Joe Thornton is already out for at least four weeks with a rib fracture while Nick Robertson will miss a few more weeks with a knee injury.

To that end, Keefe will be testing the Leafs’ depth further with his lineup changes for Tuesday's game.

Jason Spezza, Alex Barabanov and Travis Dermott will all be healthy scratches to get Travis Boyd and Joey Anderson into a game for the first time this season, and allow Mikko Lehtonen to make his third appearance on the blueline.