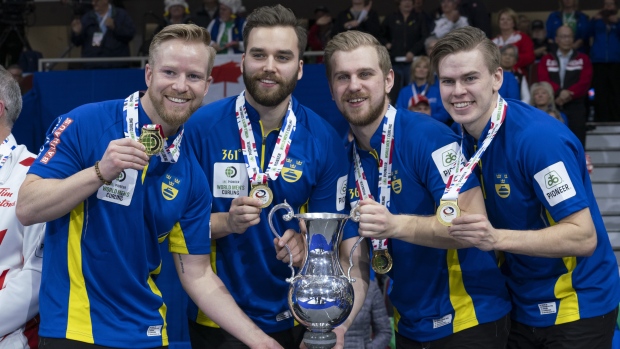 LETHBRIDGE, Alta. — Canada skip Kevin Koe put on a master class of exquisite shotmaking during the world men's curling championship, providing a bevy of highlight-reel shots that helped his team reach the final.

After two thrilling one-point playoff wins a day earlier, Koe couldn't pull it out again in the biggest game of the competition Sunday night. Sweden's Niklas Edin kept the pressure on and didn't stop until he had a 7-2 victory and his fourth career world title.

"It sucks, we wanted to win this so badly and it's very disappointing," Koe said. "We're pretty deflated. After the eighth (end) we felt terrible — a steal of two was disappointing. It's unfortunate but they're a great team."

Edin stole three more points in the ninth end when Koe's desperation quadruple-takeout attempt was slightly off the mark.

"It feels amazing." Edin said. "This was probably the sweetest win of my career. We've never played better than this for an event.

"It felt like we were dominating the whole week."

Edin earned the first seed in the round-robin standings with an 11-1 record and breezed through an 8-2 semifinal win over Japan.

He threw 90 per cent in the final to 78 per cent for Koe. Sweden finished at 92 per cent overall while Canada was 86 per cent.

"When we got that steal of two, we all knew that we were going to win that game," Edin said. "It felt amazing and so emotional."

Players had to wait through a delay of several minutes during that end so repairs could be made to the handle of one of Edin's stones.

"Honestly I've never been that nervous in my whole life," Edin said. "It was not a welcome delay."

He refocused and made a double takeout to sit three.

"I was just trying to clear my head, just slide out, technically make a good shot (with) a good slide," Edin said. "It worked out. A bit of a luck there."

Koe, meanwhile, had to play a slower shot on uncertain ice. His draw came up short to give Sweden a two-point lead.

"It's too bad what happened there before Kevin's draw," said Canada lead Ben Hebert. "That's a bit of a joke. A 12-minute delay on this handle and the ice sits. Kevin threw it perfect, timed exactly how we wanted it to, the whole week it was kind of that.

"Then we just lost it a little bit just because the frost was creeping in. Unfortunate, but they played good, they deserved to win, obviously a good championship team."

"They made every shot that end," Koe said. "We needed a miss. At the end of the day, we're taking our chances. We're not playing to keep it close."

Earlier Sunday, Switzerland's Peter De Cruz defeated Japan's Yuta Matsumura 8-4 to win the bronze medal. De Cruz took the lead with four points in the seventh and stole singles in the next two ends for the victory.

After two blanks at the start of the final, Canada was in danger of giving up four points in the third end but managed to steal a single when Edin jammed on a double-takeout attempt.

Koe hit a big-weight double and rolled it back under cover before following with a nice runback. He kept the pressure on in the fourth with a hit that rolled behind a corner guard. Edin was forced to draw for a single.

Koe didn't have to make a draw until he had hammer for the first time in the fifth. His first throw was slightly off line but his second draw found the four-foot ring for a 2-1 lead.

The Calgary skip made the packed house at the Enmax Centre pop in the sixth end with a double takeout to sit three. Edin was forced to draw for a single to pull even.

"The support has been awesome," Koe said. "It's just a pity that we couldn't win it for them."

Koe made another double in the seventh end to get a blank and keep hammer.

"They're really tough to beat," Edin said. "We were lucky to turn that game around."

Koe, lead Ben Hebert, second Colton Flasch and third B.J. Neufeld are in their first season together as a foursome.

The silver medal ended a tough stretch of results for Canada's four-player teams at major events.

Koe, who won world titles in 2010 and 2016, did not reach the podium at the Pyeongchang Olympics last year. The Canadian women's team skipped by Rachel Homan also did not win a medal at the Games.

Edin beat Koe 9-4 in round-robin play earlier in the week. Canada was the third seed in a six-team playoff pool that also included the United States and Scotland.

Total attendance for the nine-day event was 69,077. The Enmax Centre has a capacity of about 4,500 for curling.

The 2020 world men's championship will be held in Glasgow, Scotland.