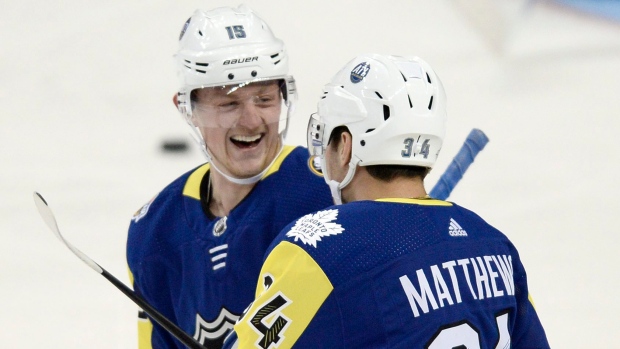 Toronto's Auston Matthews is captain for the Atlantic Division team that includes teammate John Tavares, Nikita Kucherov and Steven Stamkos from the league-leading Lightning and Buffalo's Jack Eichel. Montreal goaltender Carey Price was selected as an all star for the seventh time, while high-scoring Ottawa defenceman Thomas Chabot will make his first appearance.

Alex Ovechkin will skip the NHL's All-Star Weekend to get some extra rest and serve an automatic one-game suspension.

The Washington Capitals announced Ovechkin's decision Wednesday, hours before the league unveiled the full All-Star rosters. The team said the NHL's leading goal-scorer wants to take advantage of the adjoining bye week to prepare for the second half of the season.

"My body needs a rest," Ovechkin said after practice Wednesday. The 33-year-old Russian has played in 202 consecutive regular-season games and leads the Capitals with 45 points in 33 games this season.

Washington's final game before the All-Star break is Jan. 23 at Toronto. The All-Star game is Jan. 26, and the Capitals don't play again until Feb. 1 against Calgary.

Deputy Commissioner Bill Daly confirmed Ovechkin must miss either the game before or after the All-Star break. The NHL recently instituted an automatic one-game suspension for players who chose not to participate in All-Star Weekend, except in cases of injury.

Fans voted Ovechkin, the reigning playoff MVP, as the captain of the Metropolitan Division All-Star team. With Ovechkin not going, the defending Stanley Cup champions will be represented by goaltender Braden Holtby and defenceman John Carlson on a Metropolitan team that also includes Penguins captain Sidney Crosby and Rangers goalie Henrik Lundqvist.