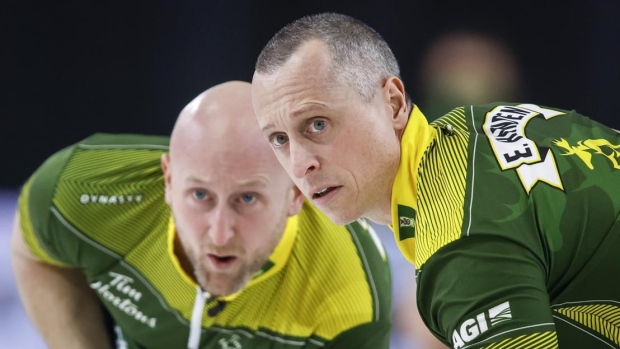 After serving as fifth at last month's world championship, E.J. Harnden has joined Team Brad Gushue on a full-time basis.

Harnden fills the vacancy created by Brett Gallant's departure to join a new-look Team Brendan Bottcher next season. Gushue, third Mark Nichols, Gallant and lead Geoff Walker enjoyed a strong season that was capped last weekend with a title at the Champions Cup.

Harnden won Olympic gold with Team Brad Jacobs at the 2014 Sochi Olympics. Jacobs is taking next season off and his teammates have all joined new squads.

Gushue defeated Jacobs in the final of the trials last November. It was another chapter in the so-called "Battle of the Brads," which has been one of Canadian curling's best rivalries over the last decade.

Gushue said that once Gallant decided to move on, the team developed a "pretty short list" of players that they might be interested in. He added that once Harnden became available, things came together "pretty quick."

"I know it was pretty chaotic for all the other teams (who made changes) but it was honestly quite simple for us," Gushue said. "E.J. was the guy we wanted."

Gushue added that Walker, who's based in Edmonton, will become a resident of Newfoundland and Labrador again to satisfy Curling Canada's residency rule requirements.