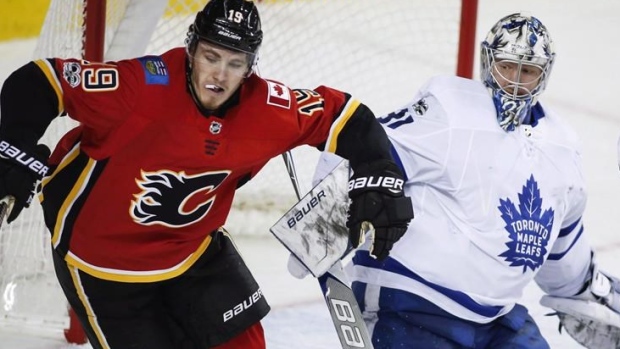 Woe, Canada? Not this week – at least in TSN`s 7-Eleven Power Rankings.

Canada’s best teams this week include: the No. 4 Toronto Maple Leafs, who have placed in the top five in our panel’s first six Power Rankings of the season; the sizzling Calgary Flames, who leap 18 spots to No. 5 this week after four consecutive victories; the No. 6 Edmonton Oilers, moving up from No. 10 last week for an 8-4-1 record after starting out last season 4-8-1; the Winnipeg Jets – perched in the top 10 in our first six rankings of 2018-19 – at No. 7 this week; and the No. 9 Vancouver Canucks, climbing 13 spots from No. 22 a week ago after the return of rookie sensation Elias Pettersson to the lineup with seven points in the team’s three straight wins. Last week’s No. 9 team, the Montreal Canadiens, fall four places to a respectable No. 13 after going 1-2 last week.

Moving up to No. 1 in our rankings this week are the Nashville Predators who have three consecutive wins led by the return of Pekka Rinne to the lineup to sit first overall in the NHL standings. The Tampa Bay Lightning, who slip out of top spot to No. 2 after going 3-1 last week, are followed by the Minnesota Wild, who move up three spots to No. 3 as they continue their season-long, seven-game road trip and are 2-1 so far.

Rounding out our panel’s top 10 this week are the No. 8 New York Islanders, who jump 10 spots from No. 18 a week ago on the strength of five straight wins, including back-to-back victories over the slumping Pittsburgh Penguins (No. 14 this week after being in the No. 4 position last week), and the Boston Bruins at No. 10, dropping three spots after being shut out twice in their last three games.

The league’s bottom-five teams this week, according to our panel, include the No. 27 Anaheim Ducks, who slip three places despite ending their seven-game losing streak with an overtime win over the Columbus Blue Jackets on Sunday; the Detroit Red Wings, who rise to No. 28 this week after winning three of their last four following three straight weeks dead last; the No. 29 Florida Panthers, who split their two-game series in Finland with the Jets; the slumping Ottawa Senators at No. 30, dropping five spots from last week; and the No. 31 Los Angeles Kings, who have won two of their last three but still own the NHL’s worst record. The Kings are now being guided by interim head coach Willie Desjardins following the firing of John Stevens on Sunday.

Pekka Rinne returned to the lineup in style, facing 43 shots and defeating high scoring Tampa Bay 4-1 and then shutting out Boston 1-0 on Saturday. The Predators were 2-2-0 while he was injured.

They have lost three times in regulation this season. In the game following each loss they are 3-0 and have outscored their opponents 21-6. Steven Stamkos has three goals in his last four games.

A five-game winning streak ended with a 5-2 loss in Vancouver, but the Wild went right back to work with a 4-3 win in Edmonton and a 5-1 win in St. Louis, outshooting the Blues 45-16.

Toronto got off to a rough start after losing Auston Matthews, scoring just one goal in two home losses, but then went on the road and beat Pittsburgh 5-0 to improve their road record to 6-0.

Since being crushed 9-1 by Pittsburgh on Oct. 25, the Flames have been on fire; going 4-0-1 and riding a four-game winning streak. They’re the only team with at least five 15-point scorers.

Winger Drake Caggiula was the early weapon in consecutive victories. He scored 18 seconds into a 4-0 win over Chicago, and scored 12 seconds into Saturday’s 4-3 win over Detroit.

Patrik Laine scored four of Winnipeg’s six goals in a two-game split in Finland against Florida. Three of the four were on the power play and extended Winnipeg’s power play goal game streak to 10.

Highlights from the Islanders’ five-game winning streak include three of those wins on the road, two of the victories over Pittsburgh and a 35-save Thomas Greiss shutout over New Jersey.

It’s no coincidence that they've won three in a row just after rookie Elias Pettersson returned to the lineup. They’ve scored 16 goals in those three games and Pettersson has seven points in those games.

Goals are harder to come by for the Bruins lately. They’ve been shut out twice in their last three games. David Pastrnak leads the team with 11 goals but has just one in his last four games.

The Avs are going through a rough patch with three straight losses (one in overtime) but not for a lack of goal scoring. They lost 6-5 to Calgary, and scored six goals and still lost 7-6 (OT) to Vancouver.

It’s the scoring that’s so impressive during the Coyotes’ five-game winning streak. They’ve outscored opponents 24-7, with Alex Goligoski going 1-6-7. A year ago, they were 1-10-1 after 12 games.

Two 4-1 losses sandwiched a 6-4 win over Washington, but it’s Max Domi who has been the story lately. In Montreal’s last eight games he has seven goals, just two shy of his total for all of last season.

A three-game losing streak (one by shootout) included two at home where they are 2-3-1 compared to 4-0-2 on the road. Evgeni Malkin’s nine-game point streak came to an end in a 5-0 loss to Toronto.

After losing their first three games on the road, the Stars have reversed their fortunes with three straight road wins against some tough opponents in Montreal, Toronto and Washington.

Joe Thornton scored his first goal, a game-tying marker for the Sharks after returning from an injury, and Timo Meier finished it off in overtime for his 11th goal of the season to beat Philadelphia 4-3.

Buffalo recovered from a 4-2 loss in Ottawa to whip those same Sens at home 9-2. Jason Pominville, enjoying life on a line with Jeff Skinner and Jack Eichel, has seven goals in his last eight games.

Marc-Andre Fleury’s shutout of Carolina was his second of the season to tie him for the league lead. It was also the 50th of his career, moving him into an exclusive club with 28 other goalies.

The 'Canes have lost four in a row including one in OT in which they fired 51 shots at Arizona. They’ve had at least 40 shots in nine of their 14 games and have outshot their opponents in every game.

The Rangers don’t mind playing some extra time. Three of their six wins have been by shootout and one other was in overtime. Kevin Shattenkirk leads with two shootout goals in two attempts.

The Flyers rebounded from a three-game skid - during which time they scored just two goals - to win twice and earn an OT point in California. Nolan Patrick has five of his seven points in those games.

A seven-game road trip did not start off well for the Devils with three losses in which they were outscored 20-8. They are now 0-4-0 on the road for the season, compared to 5-1-1 at home.

The Blackhawks managed just 15 shots against Calgary on Saturday and blew a 3-1 lead to lose 5-3, their fifth consecutive defeat. They’ve been outscored 22-9 in those five games.

After sitting out all of last season with an injury, Robby Fabbri returned to action and earned an assist in a 5-3 defeat of Vegas. Their two-game winning streak ended with a 5-1 loss to Minnesota.

Cam Fowler took it upon himself to end Anaheim’s seven-game losing streak (0-5-2). He scored all three goals – his first three of the year – including the overtime winner in 3-2 win over Columbus.

After earning just one win in their first 10 games, the Red Wings have won three of their last four. The top scorer during those four games is Dylan Larkin with eight points to lead the team in scoring.

The Panthers split two 4-2 games in Finland against the Jets. Aleksander Barkov was outduelled by Patrik Laine's four goals to his zero goals in the battle of returning Finnish stars.

The Senators, ranked No. 13 two weeks ago, got off to a good start in their first road game of the year with a win in Toronto. Since then they are 0-4-1 away from home and have been outscored 30-12.

The Kings have won two of their last three, significant for them because it represents half of their wins on the season. Will they turn it around after Sunday’s firing of head coach John Stevens?