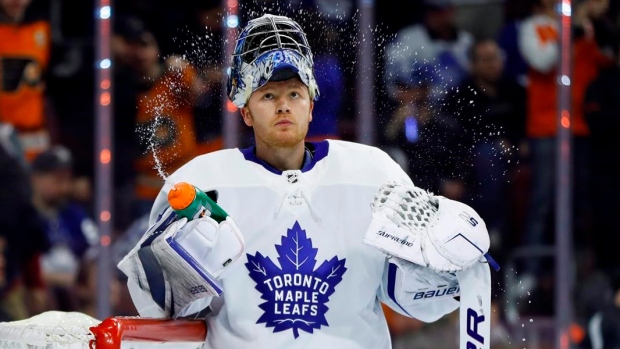 TORONTO — Frederik Andersen's busy off-season has seen him fly home to Denmark, work to hone his on-ice skills in California, and attend a couple of weddings.

For all the Maple Leafs' jet-setting No. 1 goalie has seen and done, the Jewish nuptials of Toronto winger Zach Hyman take the cake.

"That was a lot of fun," Andersen said with a smile. "It's a little different when you lift everyone up on the chairs and break the glass."

Something a little different is also what the netminder and his teammates will experience the first day of training camp following the Leafs' summer of roster upheaval.

Toronto waved goodbye to forwards Nazem Kadri, Patrick Marleau, Connor Brown and Tyler Ennis, as well as defencemen Ron Hainsey and Nikita Zaitsev, via trade or free agency since being eliminated by Boston in the first round of the playoffs for the second consecutive spring.

Jake Gardiner, a consistent contributor on the back end since 2013, remains an unrestricted free agent, but it's hard to envision a scenario where general manager Kyle Dubas will be able to fit him under the salary cap with star winger Mitch Marner still in need of a new contract.

"A lot of new faces," Andersen said Thursday night at the annual Smashfest charity ping-pong event. "Saying goodbye to guys I got to know a lot over the last few years is tough.

"We keep building and keep trying to find ways to improve."

Andersen, who was 36-16-7 with a .917 save percentage and a 2.77 goals-against average last season, doesn't think it will take long for the group to mesh.

"It's going to be a challenge, but I think most hockey players can become good friends," he said. "I don't think that's going to be the biggest concern."

A concern for Andersen in 2018-19 was the nagging groin problem that saw him miss a chunk of games. But the netminder, who will turn 30 on Oct. 2 when Toronto hosts Ottawa to open the NHL schedule, said he's been working hard to put the issue behind him.

"That's of course been a focus, trying to rehab some things, the groin, and try and get that back to 100 per cent," Andersen said. "You push the limits in some of the other (areas) to try to get better and quicker."

Andersen was a surprise inclusion at Smashfest's eighth edition — an event hosted by former Leafs centre Dominic Moore and supported by the NHL Players' Association. Heading into Thursday, the event had raised more than $865,000 since 2012 for awareness and research related to concussions and rare cancers.

He's started 66, 66 and 60 games — Andersen likely would have received the nod more last season had he not been injured — and a consistent theme around the Leafs has centred around the goalie's workload.

The last four Stanley Cup-winning netminders have started 58 games or fewer in the regular season, and Andersen let out a "here we go" before one reporter could finish his question about rest.

"I just try and prepare to be in the best shape possible," he said. "Once we get closer to camp and to the season, we can have that discussion."

The Leafs punted out-of-favour backup Garret Sparks in a cap-inspired move with Vegas earlier this week, but re-signed Michael Hutchinson, who started five games for Toronto last season, and also agreed to a professional tryout with Michal Neuvirth.

Andersen said he's interested to see how the 31-year-old Neuvirth, a veteran of 257 regular-season games and 14 playoff starts, measures up.

Andersen added he's moved past the disappointment of the series with Boston — Toronto had a chance to close things out in Game 6 at home before also falling in Game 7 on the road.

"You still think about it sometimes, but it's not a focus," he said. "It's something you look back on and try and use as an experience and motivation for what you're doing in the summer."

And Andersen was of course queried about Marner, the restricted free agent still in need of a lucrative new contract. The goalie said he's spoken to the 22-year-old forward, but shies away from talking to teammates about personal business.

"He's confident that he's going to be here for camp," Andersen said. "Hopefully Kyle and him and his agent can get it done.

"I want to see him back really bad."