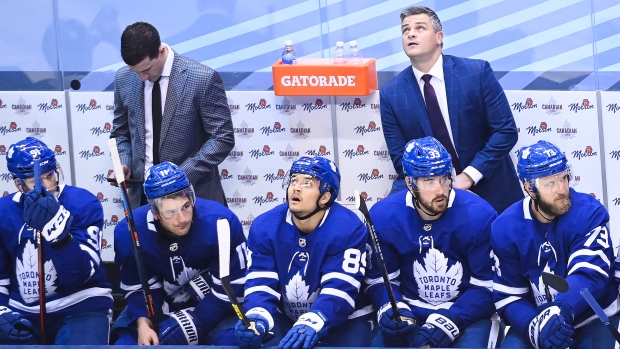 TORONTO — As the Maple Leafs were being shut out by the Columbus Blue Jackets in Game 1 of their qualifying-round playoff series on Sunday, Mitch Marner could not ​get even one shot on net to try and help turn the tide.

But when Toronto aims to even the best-of-five in Tuesday’s Game 2, Marner has a plan in place to earn a little redemption.

“Definitely [didn’t have] enough shots on net, didn't produce enough offensively,” Marner assessed of his performance to reporters on a Zoom call from the NHL’s Eastern Conference hub at the Royal York Hotel on Monday. “The goal tomorrow night is just to have more confidence with the puck, not to try to throw stuff away, skate more with it in my hands and try to make more plays with the puck, and just have confidence with it. But at the same time, be responsible and smart with it.”

Marner was the only top-nine forward for Toronto that didn’t put a puck on Blue Jackets goaltender Joonas Korpisalo in the Leafs’ 2-0 loss, and that was while his line with John Tavares and Ilya Mikheyev produced Toronto’s highest possession numbers of the game at 62 per cent.

The problem was Columbus’ stifling defence, and the work of David Savard and Vladislav Gavrikov. The Blue Jackets were the third-best defence in the NHL this season, going up against the league’s third-best offence in the Leafs.

But that defence tandem did solid work taking away areas of the ice that Marner and Tavares can usually capitalize on, and robbed them repeatedly of gaining momentum in the offensive end.

“I think they did a good job inside their zone, keeping five tight,” Marner said. “Not a lot of shots got through and when they did, opportunities for a second [chance] weren't really there. We're trying to figure out ways to get by that. We've talked about those second opportunities today, and it's something that we’ve got to get better at and something we need to get better at in this series if we want to keep going.”

“They commit themselves, and block a lot of shots,” Tavares said. “They do a really good job of protecting the front of the net and the middle of the ice and the high-danger scoring areas. Now it’s about doing the best we can breaking them down, drawing them out away from the net, make them have to defend and play in their own end consistently. I'd like to think over 60 minutes you can wear them down.”

It was the Leafs who had the wind taken out of their sails in Sunday’s third period, when a 0-0 stalemate was broken early in the third period by Cam Atkinson’s wrister beating Frederik Andersen’s blocker.

Reproducing a similar play off the rush that would fool Korpisalo is something Marner and Tavares have done numerous times before, but Columbus’ reputation as defensive stalwarts proved to be only too true in Game 1. The Blue Jackets were the NHL’s best team in the regular season at defending against the rush, something Tavares’ group especially will need to find their way around.

“This team is going to make it really hard for us offensively, in particular on the rush, a spot where Mitch and John have a lot of success,” said head coach Sheldon Keefe. “Because of that, we have to find different ways to score and that's an adjustment. Scoring is what we really need. We just need those guys to be playing at their best, especially now coming off of a loss. We think everybody on our team has got another level to get to and we're going to need it tomorrow.”

While Tavares has talked frequently since entering the NHL’s “bubble” about the importance of Toronto being comfortable in these unprecedented conditions, it was the Blue Jackets who were feeling a little too cushy on the ice Sunday. And that’s something the Leafs can try to counteract.

“They play their team identity, their structure very well. They're very comfortable in those types of [one-goal] games,” Tavares said. “They play really well as a five man unit and playing five on the inside, they have a comfort level there. I think we have to adjust and adapt with the way we want to play and the skill sets that we have and starting with myself, I have to do a better job of finding ways to break them down and create the opportunities that we need.”

It’s all easier said than done, of course. The reality for Toronto now is it has to win three of these next four games to advance into the NHL’s round of 16. But if Monday’s practice was any indication to Keefe, his team is up for the challenge ahead.

“That's what their system is designed to do, is to frustrate you,” he said of Columbus. “We’ve talked a lot about that. But the good news is in just talking to our guys and the type of practice that we had, our guys are not frustrated. Our guys are hungry to get back at it and recognize where we can get better and know that we have more to give so we'll be ready to play tomorrow.”