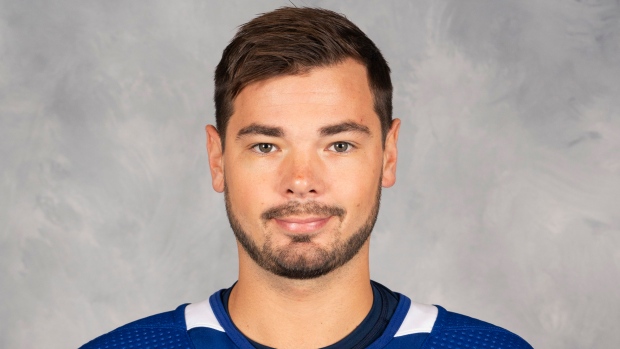 The 31-year-old was brought in to compete with Michael Hutchinson for the backup job behind Frederik Andersen at training camp, but saw just two periods of action in pre-season due to an unspecified injury.

Hutchinson, 29, likely cemented his spot as Toronto's No. 2 netminder with a 38-save performance in a 3-0 shutout of the Montreal Canadiens on Monday behind a largely American Hockey League lineup.

Neuvirth was supposed to make the trip to Montreal, but head coach Mike Babcock said before the game he "wasn't feeling up to it."

Selected 34th overall at the 2006 NHL draft, Neuvirth is 105-93-26 in his career with a .910 save percentage and a 2.71 goals-against average in 257 games, including 228 starts, with the Washington Capitals, Buffalo Sabres, New York Islanders and Philadelphia Flyers.

Plagued by various injuries throughout his career, Neuvirth played just seven games with Philadelphia in 2018-19.

Hutchinson was acquired by Toronto in a trade with the Florida Panthers last season when Andersen went down with a groin injury. He was then thrust into the starter's job when then-backup Garret Sparks suffered a concussion in practice, going 2-3-0 with a .914 save percentage and a 2.64 GAA for the Leafs.

The Leafs also recalled goalie Kasimir Kaskisuo on Tuesday from their AHL camp.