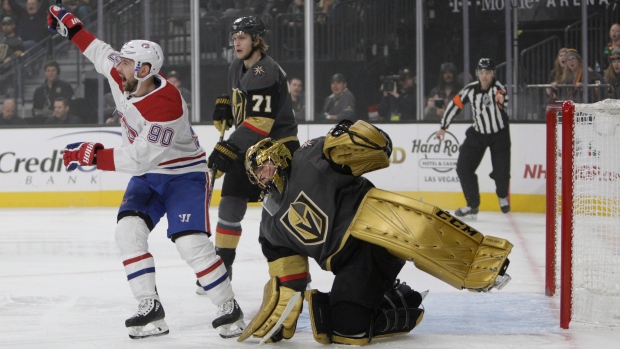 The biggest story in the National Hockey League is easy. It’s the Montreal Canadiens and their Cinderella run through the North Division. Their effort has been remarkable; their goaltending even better.

What makes Cinderella stories so captivating? They usually burn out over time, the result of teams having to face increasingly difficult competition.

That is what makes the Canadiens so fascinating. However bullish or bearish you are on the Toronto Maple Leafs, they were a clear favourite in Round 1 after finishing 48 goals better than the Habs in the regular-season standings.

Toronto’s stars didn’t show up in the first-round series, and the defensive mistakes were there in spades. Montreal applied the requisite pressure – and capitalized on the opportunities they had – en route to the upset. It was a total team accomplishment.

Then the Canadiens improved upon that, sweeping the Winnipeg Jets in stunning fashion.

Montreal deserves immense credit. They also are going to have a serious jump in competition in the next round. Whether it’s the Colorado Avalanche or Vegas Golden Knights, it’s likely Montreal will be facing the best team remaining.

Colorado (+64) and Vegas (+67) led regular-season goal differentials by a considerable margin. There are no weaknesses on either roster, and their series deadlock at two games apiece seemed inevitable. I’ve said it before, but the pace of this series is unlike anything we have seen in recent history.

It is a fascinating thought exercise to consider which matchup makes more sense for the Canadiens. Styles make fights. So, if you are a Montreal Canadiens fan eager to see your team through to the Stanley Cup, which of the two would you most want to play?

The upside of playing Colorado

Since we are really talking in relative terms, it’s impossible to ignore what Vegas has done to Colorado in this series. Despite the series being tied, Vegas has absolutely pulverized the Avalanche at even strength – a core competency of the Canadiens.

I’ve shown this graph a couple of times, but the Avalanche are in the middle of a beating the team hasn’t seen in years: 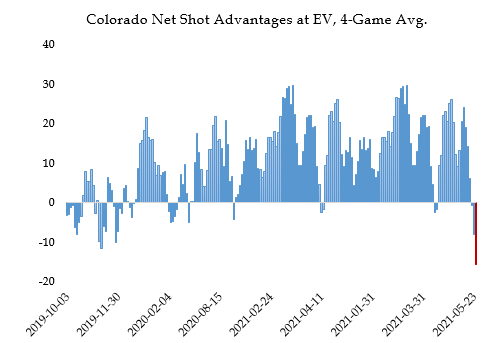 What has been true about Colorado for a couple of seasons now – unwavering dominance at even strength – has run into a wall.

The Avalanche have employed a punishing degree of speed, complementing their star power up front, to pummel teams in the offensive zone.

This season alone they finished a jaw-dropping 868 shots better than their opponents – Montreal (+449) and Vegas (+359) were also in the top five, if you want to understand just how extraordinary that accomplishment was. That volume turned into goals more often than not, with the Avalanche scoring 139 even-strength goals (second in the league).

Few considered the possibility of a team being able to neutralize Colorado’s speed, but Vegas has in considerable fashion. The Avalanche blueline has been unable to deal with the Golden Knights’ forecheck. 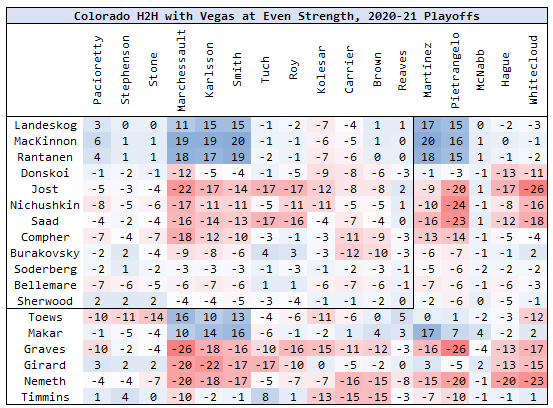 This does not look like the same team that was 868 shots better than their opponents in 56 regular-season games. I pay specific attention to the Nathan MacKinnon line, which has had a difficult time against the Mark Stone line.

In 33 head-to-head minutes, the Avs’ big line has fought to break-even, and has yet to score a single goal against Vegas’ top line.

Colorado does have the requisite depth to overcome a top line’s struggles, but not in a matchup against Vegas. While the MacKinnon line has had very limited success at even strength (some positive minutes there against the Jonathan Marchessault group), the rest of the team has been taken to the woodshed. Colorado’s middle-six forwards in particular have spent the entire series in the defensive zone, and the non-Cale Makar blueline pairings have too.

All this to say: If Colorado doesn’t have the puck, they look a lot less lethal. We weren’t sure if any team could slow them down, but the Golden Knights have done just that. And if you are Montreal – a very strong even-strength team in their own right – that’s intriguing.

Vegas may not have the most talented roster, but they certainly appear to be the most structured and disciplined team left. We’re seeing what that sort of combination can do to talent – even talent as great as Colorado’s.

The upside of playing Vegas

You didn’t forget about this game, did you?

The Golden Knights may have looked the better of the two sides in this second-round matchup, but there is plenty to fear about playing the Avalanche. Chief among those components: Colorado’s star power can be overwhelming, and Vegas has a history now of struggling to find scoring in the postseason.

The first point is rather straightforward. The MacKinnon line – save maybe the Connor McDavid line in Edmonton – has been the most electric scoring trio in the league for some time. Colorado doesn’t even have to be playing particularly well for MacKinnon’s line (he’s generally played with Mikko Rantanen and Gabriel Landeskog) to explode.

Offensively, they really are without comparison. Consider their offensive production as a unit over the league relative to league averages at even strength: 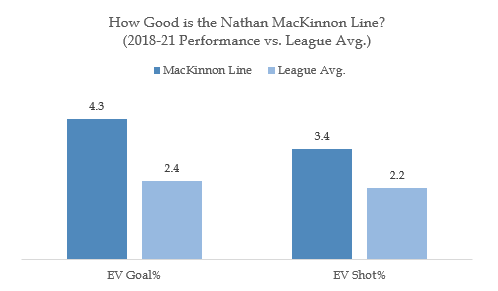 Finding a team equipped to handle that level of offensive volume is rather difficult. It usually relies on an elite possession team with strong goaltending behind it, and nothing less than that.

The other obvious component of concern playing the Avalanche: their power play is absolutely terrifying. They have twisted the penalty kills of St. Louis and Vegas into pretzels, scoring on a whopping 41 per cent of their opportunities this postseason.

Of course, this is a carry-over from the regular season, where the Avalanche were one of the most productive teams up a man – a stark contrast from Vegas’ mediocrity there: 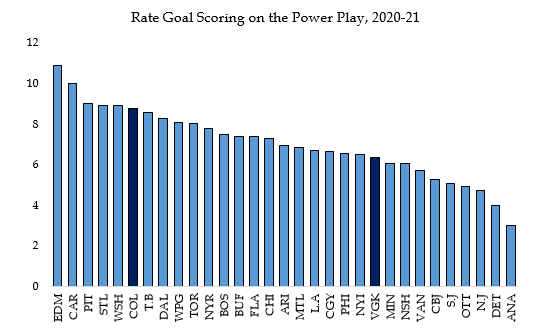 There is too much speed and shooting talent on the Avs power play to close down all attacking options, and even if you had the personnel to effectively rotate in the defensive third, the puck movement is too fast.

Ultimately you get an Avalanche power-play unit that is generating heaps of shots against overburdened goaltenders, with plenty of those shots coming from the circles and the low slot area (via HockeyViz): 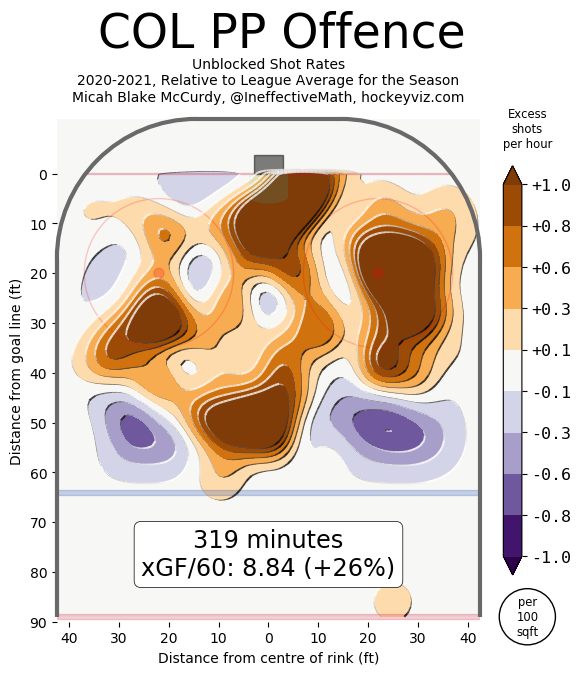 Every team would be fearful of Colorado’s prowess here, but perhaps doubly so for Montreal – the Canadiens finished just 25th in the league on the penalty kill, conceding 8.1 goals per 60 minutes there. Said another way: Montreal’s penalty kill seems capable of handling a middling Vegas power-play unit, but Colorado is another story.

In many ways, selecting the preferred opponent for Montreal may be an exercise in splitting hairs. The Canadiens will be a considerable underdog in either series, but with all four lines clicking and a future Hall-of-Fame goaltender in net, the Canadiens have a puncher’s chance.

The question is: Which of these two teams do you want in the ring?