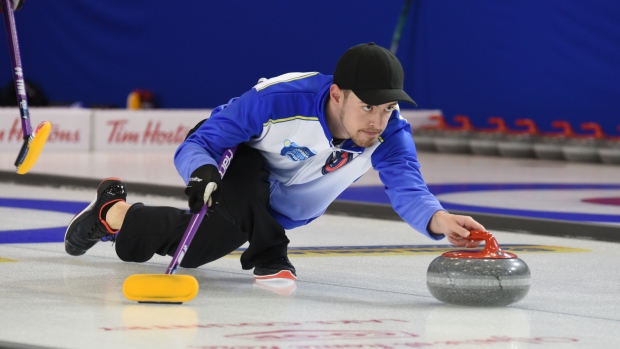 Tyler Tardi could have chased more national and international curling history in his final year of junior eligibility.

Both are age eligible to enter the B.C. junior playdowns one last time, but they've said goodbye to the junior ranks.

He and Middleton dove into men's competition this season with front end Jordan Tardi, Tyler's older brother, and Alex Horvath.

"That's kind of the goal right now is to sacrifice a year of juniors to make a bigger leap in a shorter amount of time."

No skip has ever won three consecutive world junior men's crowns. The Canadian juniors will be held Jan. 18-26 in Tardi's hometown of Langley.

But Tardi was ready to curl out of his comfort zone.

"I think we were pretty satisfied with our record in juniors and wanted to look forward to bigger things," the skip said. "Juniors is a great accomplishment and a great stepping stone.

"I think in the big scheme of things we're setting our goals to more the men's circuit and the big show. That's where we want to be."

Tardi won his first two Canadian junior championships with Jordan at second. Horvath was Tardi's lead last season, so it's a young foursome representing the Langley and Victoria curling clubs.

The jump from junior to competitive men's curling can be demoralizing the first few seasons as young teams get thumped by more experienced rinks.

"I think we knew you're going to get kicked around in men's for a few years regardless of when you do it," Tardi said. "Probably just want to get it over with as soon as we could."

They're holding their own on the World Curling Tour winning the Prestige Hotels and Resorts Curling Classic in Vernon, B.C., and reaching the finals of the Kamloops Crown of Curling and the Red Deer Classic.

Tardi laid the groundwork for the transition out of juniors last season.

On the heels of a third Canadian junior win in Prince Albert, Sask., Tardi entered the B.C. men's playdowns. He went 2-3 and lost out in the C event.

Measuring themselves against the world's elite men's teams reinforced Tardi's belief he could compete.

"The first year we won a game and we didn't really have many close games after that," Tardi recalled.

"The next year, last year, we had one game that didn't go so well, but the next three we lost on last shot.

"We kind of figured that there's a chance there and with some hard work maybe we can turn those last shots to be in our favour instead."

Tardi would love to make his Brier debut right out of the junior ranks at the Canadian men's curling championship Feb. 29 to March 8 in Kingston, Ont.

"I don't think there's any teams that didn't go to the Brier and had a lot of success, so it's a big goal for us," he said.

"There's always a lot of big names there so if we can get there ourselves, I think we're one step closer to being on that list."

Tardi and girlfriend Dezaray Hawes have qualified a fourth time for the Canadian mixed doubles championship, which will be in Portage la Prairie, Man., next March. The duo reached the quarterfinals in 2019.

Tardi is featured in the 2020 Men of Curling calendar that raises money for the models' charities. He's fundraising for the Curling Canada Foundation and Childhood Cancer Family Support.

For his photo shoot, Tardi decided carrying a curling rock up a mountain would show off his muscles.

"I didn't really plan that out too well," he said. "It's been a lot of fun actually.

"It makes you feel good because you're doing it for a good cause as well."

In the Rings, a weekly curling notebook, is published weekly.