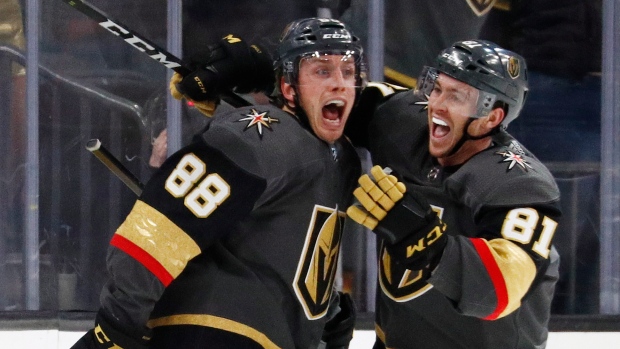 VANCOUVER — The Vancouver Canucks have acquired defenceman Nate Schmidt from the Vegas Golden Knights for a third-round pick in the 2022 NHL draft.

The Canucks announced the deal on Monday night, shortly after the Golden Knights reportedly came to an agreement with free agent defenceman Alex Pietrangelo on a seven-year deal.

Schmidt, from St. Cloud, Minn., has produced 29 goals and 140 points in 368 career regular-season games over seven NHL seasons split between Vegas and the Washington Capitals, who signed him as a free agent in 2013 following three seasons at the University of Minnesota.

He has five years remaining on a six-year, US$35.7 million contract that carries a $5.95 million annual salary cap hit.

"Nate has been one of the top defencemen in our division in recent years," said Canucks general manager Jim Benning. "He's a dynamic player who competes hard all over the ice. I think he will be a really good fit in our group."

Pietrangelo reportedly agreed to terms with the Golden Knights on a $61.6 million, seven-year deal Monday, according to a person with direct knowledge of the contract. The person spoke to The Associated Press on condition of anonymity because the deal had not been announced by the team.

Schmidt was among the trade candidates to clear cap space after Vegas already sent centre Paul Stastny to Winnipeg.

— with files from The Associated Press

This report by The Canadian Press was first published October 12, 2020.