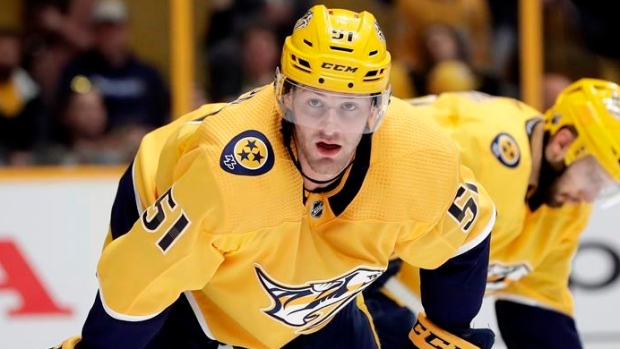 NASHVILLE — Austin Watson's girlfriend is taking blame for the incident that led the NHL to suspend the Nashville Predators' forward for 27 games, a punishment reduced to 18 games by an arbitrator on appeal.

Jenn Guardino issued a statement Saturday saying the incident on June 16 was not an act of domestic violence and that Watson would never hit or abuse her.

"My behaviour and state of intoxication lead to the police being involved that day," Guardino said. "I have struggled with alcoholism for many years and I am actively involved in AA. I am fortunate to have Austin's continued support with my treatment. We handled matters poorly on June 16th and know that we need to make better decisions going forward."

Guardino also apologized to everyone involved, including the Predators and the city of Nashville.

Watson was arrested June 16 after a witness flagged down a police officer to a gas station in Franklin, Tennessee. Watson told police he and his girlfriend were arguing and that he pushed her. Officers said they found red marks on her chest, and she said Watson caused them. Watson pleaded no contest to domestic assault on July 24.

He can have the misdemeanour charge dismissed by fulfilling terms of his judicial diversion program. Watson must serve three months of probation and complete both an in-patient treatment program and a batterer's intervention program.

The NHL suspended Watson on Sept. 12 for 28 games, and both the league and the NHL Players' Association announced Thursday that arbitrator Shyam Das had reduced it to 18 games.

The league issued a statement Friday saying the NHL was disappointed with the arbitrator's decision on an issue of personal conduct. The NHL doesn't have a written domestic violence policy and takes each situation on a case by case basis.

The NHLPA has defended its work on domestic violence awareness with both rookies and throughout the season, noting the CBA giving players the right to appeal punishment for off-ice conduct.

Watson is a former first-round draft pick who scored a career-high 14 goals and had five assists in 76 games during the 2017-18 regular season. He had five goals and three assists in 13 playoff games.

The 26-year-old Watson has 23 goals and 24 assists in 216 career regular-season games, all with the Predators.