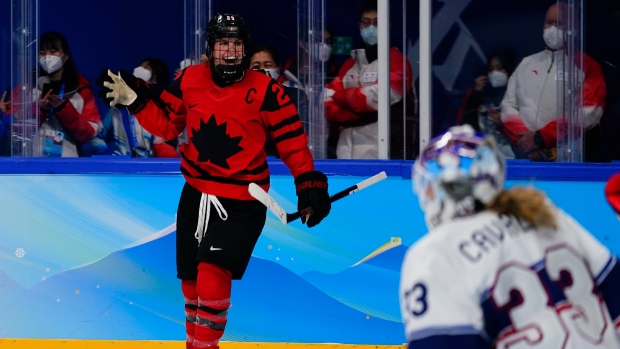 While the captain of Canada's gold medal-winning women's hockey team is currently taking some much-needed time away from the ice, she has no plans to retire from playing.

The 30-year-old forward is even open to the idea of strapping on her gear for a fifth Olympic run at the Milano Cortina Games in 2026.

“If the body holds on, if I can still keep up with those youngsters, I would love that," Poulin said in a phone interview with The Canadian Press. "The heart and the mind is still there so we’ll go one year at a time. But I still love (playing hockey)."

Dubbed "Captain Clutch" for her uncanny ability to rise in big games, Poulin once again led Canada to gold with two goals in the final at the Beijing Games last month. She has now scored in four consecutive Olympic finals, tallying seven goals in those must-watch games.

There's been much speculation about how the three-time gold medallist will follow up her latest Olympic performance, including talk of a potential role with an NHL team.

Poulin isn't ready to leave the ice for a seat in a front office just yet, though.

The general manager of the ECHL's Trois-Rivières Lions publicly mused recently that he was interested in signing Poulin to play. Momentum Hockey, the agency that represents Poulin, quickly shot down the idea, releasing a statement in French that said she has no intentions of joining the team.

The statement noted that the hockey star has dedicated her career to advancing and developing women's hockey, and will continue working toward creating a women's league.

Women's hockey in Canada is a "constant dialogue," Poulin told The Canadian Press.

"We truly believe in our product and obviously every four years we have a lot of momentum with the Olympics and then we have to redo that every four years," she said. "Hopefully we’re going to change that narrative and bring it back to talk about it every year, to be excited about it."

When the Canadian Women's Hockey League folded abruptly in 2019, Poulin and many other top players joined the Professional Women's Hockey Players Association (PWHPA).

The group wants to create a sustainable professional women's league where players earn a living wage and get similar supports to male pros.

"We believe in it. We’ve been fighting to get that league not only for ourselves but for the next generation and we’ll go from there," Poulin said. "We just have to be patient. I think great things take time and I believe in that and we’ll see what happens."

She admitted that a lot of patience has already been required from everyone working toward the new league.

"Hopefully a little bit more and it will come," she added.

The PWHPA will use the momentum built up during the Olympics to continue fighting for a league, Poulin said.

The group announced Tuesday it will co-host a "Rivalry Rematch" with the Penguins in Pittsburgh on March 12, pitting Canada and the U.S. against each other once again. Poulin is one of several stars expected to play.

Poulin's also supporting hockey at the grassroots level, acting as an ambassador for Kraft Hockeyville. The contest gives communities across Canada a chance to compete for up to $250,000 in arena upgrades and an NHL pre-season game. Nominations are open until April 3.

Growing up in Beauceville, Que., the arena was where Poulin and her brother spent much of their time.

“I just think back to my personal experience and that’s where it all started, in my community, the local rink back home. That’s where hockey brings everybody together," she said.

Now, a massive poster outside the local rink bears the four-time Olympian's image.

“It’s pretty amazing. When you go back, it’s a little scary to see your face that big," Poulin said. "But it just shows how much support I have from them. It’s tremendous.

"Sometimes I need to pinch myself with everything that happened to me because it’s pretty surreal. And I’m very thankful, for sure.”