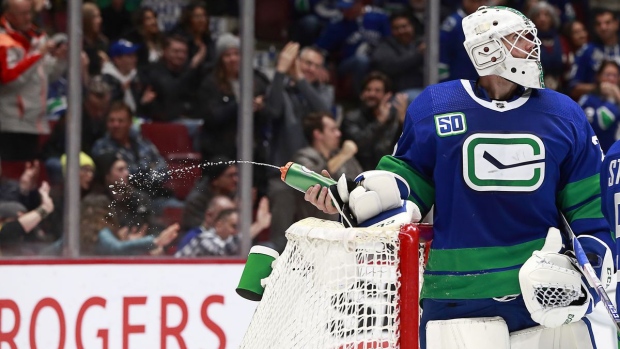 VANCOUVER — Canucks general manager Jim Benning has a long to-do list this off season and one of his first tasks is a real challenge — find a way to keep goalie Jacob Markstrom in Vancouver.

The 30-year-old Swede is a pending unrestricted free agent who was crucial in a campaign that saw the Canucks post a 36-27-6 regular-season record, good for third in the Pacific Division before the NHL season was halted in mid-March due to the COVID-19 pandemic.

When hockey restarted, Markstrom and his teammates beat the Minnesota Wild in the qualifying round and then knocked off the reigning Stanley Cup final St. Louis Blues in the first round of the playoffs in Edmonton. They Canucks fell just short in their Western Conference semifinal, losing to the Vegas Golden Knights in Game 7 to end Canada's Stanley Cup hopes.

"Jacob's an important guy in our group because he's a leader and he was our MVP over the course of the regular season," Benning told reporters on Tuesday, noting that he spoke with Markstrom's agent on Monday.

"We're going to try to figure out a way that makes sense for us and that makes Jacob and his agent happy to get him signed. We want him back and we're going to start working on that this week."

Markstrom was on pace for a career-best regular season before play was halted with a 23-16-4 record and a .918 save percentage.

However, speculation about his future in Vancouver grew after he went down with an apparent groin injury during the Vegas series.

Backup goalie Thatcher Demko stepped into the crease for the final three games. The 24-year-old stopped all but two of the 130 shots he faced through the post-season, carrying the team to a pair of wins over the Golden Knights to push the series to a seventh game.

"(Demko) was excellent in all three games. He gave our team a chance to win each game, even the last game. He made a lot of incredible saves," Benning said.

Ideally, the GM would like to keep both netminders in Canucks jerseys next season.

"With the travel schedule we have during the regular season, I believe we need to have two good goalies," he said.

Keeping both Markstrom and Demko on the roster could be expensive, however, and with a flat salary cap next season, Benning will have to do some creative juggling to keep the tandem intact.

He also needs to consider the futures of other Vancouver players on expiring contracts, including right-winger Tyler Tofolli and defenceman Chris Tanev.

Other factors complicating the situation include next year's Seattle expansion draft, the need to save cap space for the large contracts that will soon be due for young stars Elias Pettersson and Quinn Hughes, and the fact that the team doesn't currently have a pick in the first or second rounds of this year's draft.

Benning said he'll meet with the Canucks' coaches, management staff and ownership in the coming days to dissect the season that was and plan for how to move forward.

He knows his colleagues from around the league are already working hard, too.

"I've had some calls from other general managers here this morning now that we're out," he said Tuesday. "We're going to get a good read, a good feel for what the marketplace looks like this summer going into the draft and free agency. And we'll react to that."

For now, the Canucks are still digesting their playoff run, the team's first trip to the post-season in five years.

It's also an "invaluable experience" for a team stocked with emerging talent, he said.

"It's one thing to play three or four playoff games," Green said. "It's another thing to play as many as we did and understand the importance, the value of how hard it is to win at many different levels."

Captain Bo Horvat, 25, entered Tuesday's play leading the league with 10 post-season goals. Twenty-one-year-old Pettersson was sixth in post-season scoring with seven goals and 11 assists. Hughes led the rookie scoring race in both the regular season, where he had eight goals and 45 assists, and the post-season, where the 20-year-old defenceman added another 16 points (two goals, 14 assists).

Not only is the young group going to continue to develop both physically and mentally from the experience, Green said they also now know what it takes to chase the Stanley Cup.

"That's part of the exciting part of our group — they've got a strong desire to win. They'll do whatever it takes to win," Green said. "They've shown that and they're going to continue to develop and get better."

This report by The Canadian Press was first published Sept. 8, 2020.