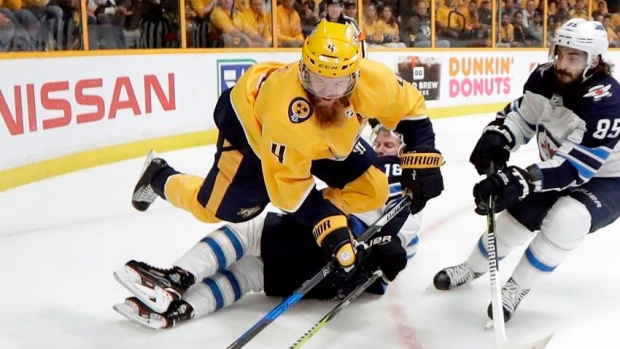 PHILADELPHIA — Remember that “shoulder surgery” defenceman Ryan Ellis had before he was traded to the Flyers?

Yeah, about that: Ellis says he didn’t have surgery. And it wasn’t even a shoulder that was injured.

Ellis said he missed 20 games this past season with the Nashville Predators because he broke a knuckle on his left hand.

“I don’t know what shoulder you’re talking about,” Ellis said on Tuesday. “I shattered my knuckle last year. That’s what I missed time for. Other than that, I’m good.”

The 30-year-old Ellis was traded to the Flyers on Saturday for defenceman Philippe Myers and forward Nolan Patrick, and concerns were raised in Philly that the team acquired damaged goods. Because of the NHL’s murky injury reporting rules, the Predators only listed Ellis out with an upper-body injury after he was hurt in a Feb. 28 game. At some point, stories emerged that Ellis — going into the third year of an eight-year contract worth $6.25 million a year through the 2026-27 season — had an injured shoulder and needed surgery.

Ellis and the Predators never bothered to say it wasn’t true. Flyers general manager Chuck Fletcher was asked Saturday about Ellis’ shoulder injury and didn't shoot it down, either.

“We believe he has good hockey ahead of him,” Fletcher said. “It’s tough to predict injuries. He certainly is a man that plays hard.”

The clean bill of health is good news for the Flyers, who believe Ellis can regain the form that made him one of the NHL’s best defencemen — a position of need since the abrupt retirement of Matt Niskanen before last season.

Ellis was the second member of the Predators’ 2017 Stanley Cup Final roster traded away this month. Forward Viktor Arvidsson was shipped off to the Los Angeles Kings on July 1.

Ellis had 18 points in 35 regular-season games, but was second on the team in average ice time at 23 minutes, 46 seconds. Ellis had one goal and four assists in six playoff games in Nashville’s first-round loss to Carolina.

During Nashville’s run to the 2017 Stanley Cup Final, Ellis was third with 13 points in 22 games. He led the Predators with 51 blocked shots that post-season.

“I didn’t envision any of this, to be honest, ever,” Ellis said of the trade.

The Flyers will pair Ellis with 24-year-old Ivan Provorov on defence. Provorov has 50 goals, 109 assists and has never missed an NHL game, playing 371 over five seasons. He set an NHL record for consecutive games played by a defenceman from the start of a career for the same team.

The Flyers have not won the championship since taking consecutive Cups in 1974 and 1975 and have not played in the Final since 2010. They have the 13th overall pick in this week’s NHL draft.

“All I want to do is win and this organization has got a winning standard and expectations to do so,” Ellis said.