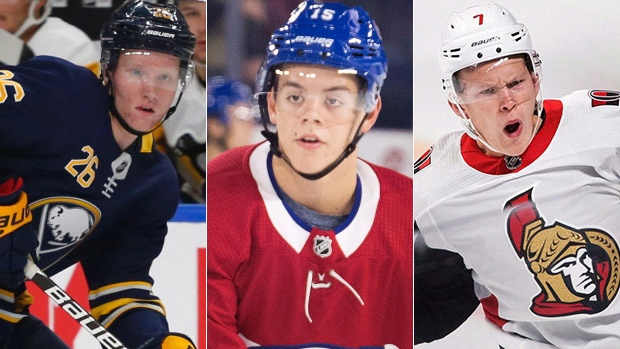 Canadian fans are usually the ones bemoaning an NHL team not releasing one of its young stars to take part in the world junior hockey championship. This year, however, some other countries will be without top-end talent at the tournament that gets underway Dec. 26. The Canadian Press looks at eligible NHL players who won't be on the ice in Vancouver and Victoria.

The No. 1 selection at the 2018 NHL draft has been a linchpin for the surprising Buffalo Sabres in his rookie season. Dahlin has three goals and 16 assists to lead all rookie defencemen in points (19), and ranks third on the team with an average ice time of 20 minutes 32 seconds through 35 games. The 18-year-old Dahlin, who had six assists at last year's world juniors when Sweden won silver in Buffalo, would have led his country's blue-line contingent this at year's tournament, but there was never any serious chance of him being released by the Sabres. The Swedes will instead have to rely on fellow NHL draft picks Adam Boqvist, Erik Brannstrom and Rasmus Sandin. They are getting centre Isac Lundestrom, the 23rd pick last June, after he was released by the Anaheim Ducks for the tournament.

The first player born in the 2000s to suit up in an NHL game, the 18-year-old has impressed in his rookie season with the Montreal Canadiens. Kotkaniemi has four goals and 12 assists in a somewhat sheltered role as a third-line centre through 36 outings. The No. 3 pick at last June's draft, Kotkaniemi would have been a big asset in Vancouver and Victoria for his country, which is looking to return to the podium for the first time since winning gold on home soil in 2016.

The 19-year-old defenceman has impressed in his first season with the Dallas Stars. Heiskanen has seven goals and 10 assists in 35 games to go along with an average of 23:07 of ice time a night, which ranks third on his team and leads all rookie blue-liners. The No. 3 overall pick at the 2017 draft played for Finland at last years world juniors, but won't be skating in British Columbia. Finland did get some good news on its back end when the Chicago Blackhawks released defenceman Henri Jokiharju to play in the tournament.

The fourth pick last June, Tkachuk has become an important player for the rebuilding Ottawa Senators. The 19-year-old has 10 goals and eight assists in 24 games in his rookie season. Tkachuk put up three goals and six assists for the Americans at last year's tournament to tie for fifth in scoring. Don't feel to bad for the U.S., though. They have an impressive roster that includes Jack Hughes, the projected No. 1 selection at the 2019 NHL draft, which just happens to be in Vancouver.

While it's not like missing Connor McDavid, the Canadians won't have two 19-year-old centres that could have taken part in the tournament. Michael Rasmussen wasn't be released by the Detroit Red Wings, while Robert Thomas is being kept by the St. Louis Blues. The ninth pick in 2017, Rasmussen has five goals and five assists in 34 games with Detroit this season. The Vancouver native was cut from the Canadian roster ahead of last year's world juniors. Thomas, who recorded six points for Canada's gold-medal winning team in Buffalo, has two goals and eight assists in 28 games with St. Louis so far in 2018-19.