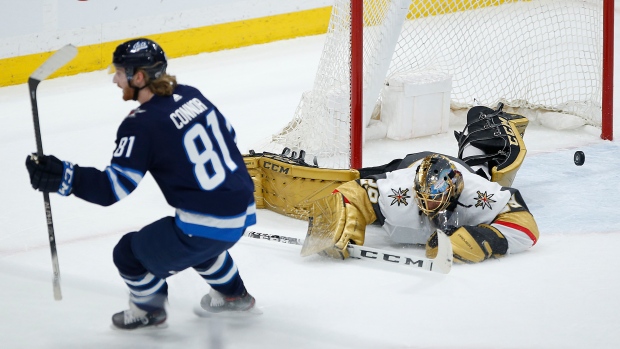 Hellebuyck made 29 saves to record his league-leading sixth shutout of the season, backstopping the Winnipeg Jets to a 4-0 victory over the Vegas Golden Knights on Friday.

“It’s a great milestone, but it’s a testament to the guys in front of me and how well we’ve been playing,” Hellebuyck said. “When we bring it, we know we can shut teams down. I thought tonight was a good game.

“That felt like a typical Winnipeg game. When our crowd gets into it like that, it’s so easy to get some momentum and really carry and push our pace on them. I’m just having a lot of fun and taking every moment in like it might not happen again. So, I’m enjoying it.”

Patrik Laine and Nikolaj Ehlers each had a goal and an assist while Kyle Connor, with his team-leading 36th goal of the season, and Mathieu Perreault also scored for the Jets (35-28-6).

“I think Helly made some great saves for us,” Laine said. “We were playing some good defence. At the end, we were just giving away some easy plays that we should just chip it in. I don’t know, I think Helly was the final key tonight.”

“Playing that kind of game against Vegas is hard,” Laine said. “They have a really good team. It’s not easy to get points from them. It was huge for us because every point matters from now on.”

It was the second of a three-game homestand for the Jets. They have won five straight at home to improve to 19-14-3 at Bell MTS Place this season.

Winnipeg jumped to a 3-0 lead in the first period.

Connor converted a 2-on-1 with Jack Roslovic late in the first period. Roslovic intercepted a pass inside his own blueline, skated the length of the ice and made a perfect pass to Connor, who beat Fleury cleanly at 18:10.

Laine gave the Jets a 2-0 lead on the power play at 4:41 of the first after Ehlers opened the scoring just 32 seconds into the contest. He stickhandled his way behind the Vegas net, then attempted to pass to Laine in front. Instead, the puck went in off the stick of Golden Knights forward Ryan Reaves.

“(The Jets start) was everything,” said Vegas coach Peter DeBoer. “It was the game. You got one team that started like they’re fighting for their playoff life, and we didn’t. The game was over in the first period. We started to play in the second period and cleaned up some of the stuff we wanted to do. The first period was unacceptable. That’s what happens when you’re playing desperate teams with great goaltending. When you get in a hole like that, it’s hard to come back.

“It’s hard to create desperation. That’s a desperate team over there. You look at the standings, they need every single point. I don’t know if we feel maybe we don’t, which would be a mistake on our part.”

Perreault upped the score to 4-0 during a second-period power play. With Jonathan Marchessault off for hooking, Perreault pounced on a loose puck in front of the net and shot it past Fleury. Defenceman Josh Morrissey and Ehlers assisted.

Winnipeg will next play host to the Arizona Coyotes on Monday.

NOTES: Mathieu Perreault returned to action after missing three games with an upper-body injury … Before the game, a moment of silence was held to honour Montreal Canadiens legend Henri Richard, who died at 84.

This report by The Canadian Press was first published Mar. 6, 2020