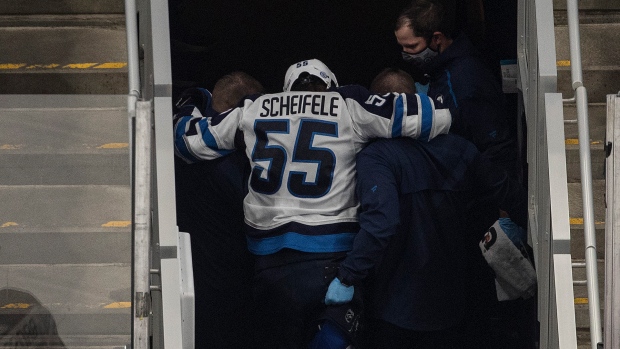 A source tells me tonight that Mark Scheifele's injury is not believed to be long term but he is still doubtful for game 2 Monday afternoon. Patrik Laine is also doubtful. #NHL #TSN

The 27-year-old appeared to suffer a left leg injury when he went awkwardly into the boards after getting tangled up with Calgary Flames forward Matthew Tkachuk in the first period of Saturday’s Game 1.

"It was intentional, it was a filthy, dirty kick to the back of the leg.” Maurice told the media. “You can’t see it on the program feed, but take the blueline feed and you zoom in, he went after the back of his leg. Could’ve cut his Achilles, could’ve ended the man’s career. It’s an absolutely filthy, disgusting hit.”

When asked about his involvement in the play, Tkachuk denied that he had any intentions to hurt Scheifele.

"No, absolutely not,” Tkachuk said after the game. “You know what, I’m back-checking on him and it’s such an accident and I felt terrible.”