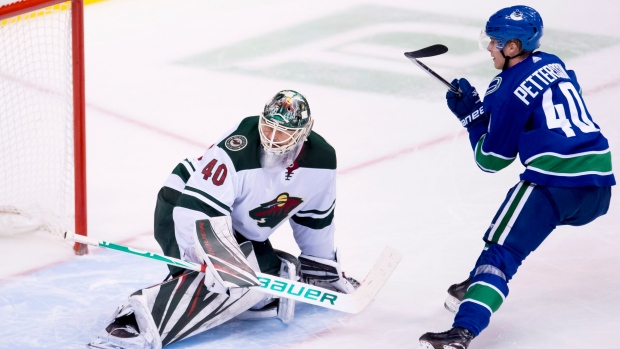 Today, we look at a fourth Western Conference matchup, this one featuring the seventh-seeded Vancouver Canucks against the tenth-seeded Minnesota Wild. 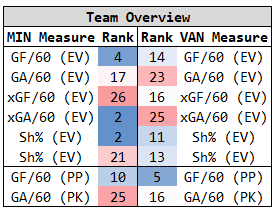 To say the Minnesota Wild had a perplexing year would be an understatement. The tumultuous regular season started with the sudden firing of general manager Paul Fenton and peaked with the termination of head coach Bruce Boudreau.

Despite playing at a 92-point pace, it was hard to know what you had with this Wild roster. Offensively, they struggled mightily to generate meaningful offence, and yet they carried the league’s second highest even-strength shooting percentage (9.4 per cent).

Defensively, the Wild’s core defensive units – as they have done for years now – were exceptional at forcing shooters to the perimeter and keeping the low and mid-slot clean from dangerous attacking sequences. But Minnesota goaltenders – specifically Devan Dubnyk – couldn’t buy a save for most of the season.

In other words: all of the puck luck that fell into this team’s lap offensively was washed away by bad goaltending on the defensive side of things. That makes getting the proper pulse of the quality of this team dizzying to say the least.

You certainly wouldn’t expect this for a team that ranked 12th in scoring and 23rd in defence: 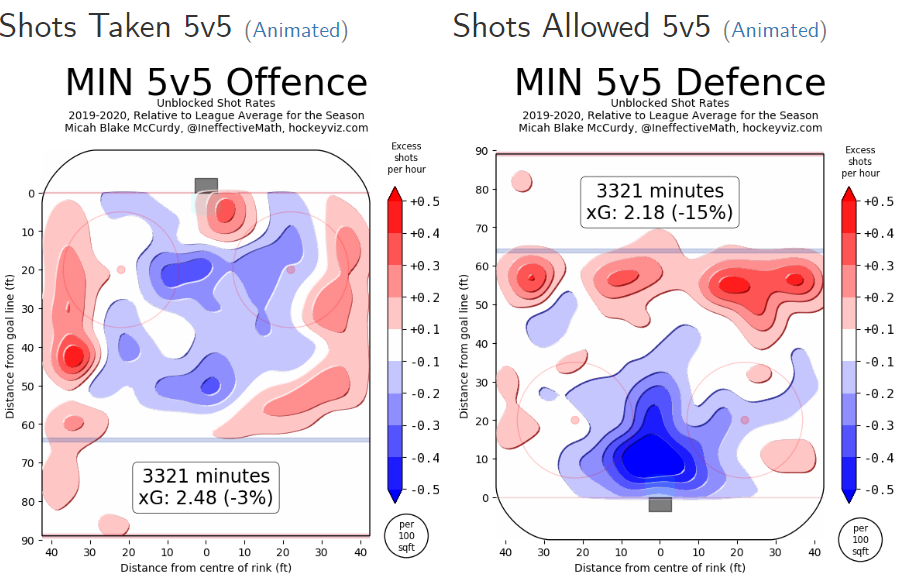 At the very least, it makes the Wild an interesting opponent for a Vancouver team that showed quite impressive for most of the year – a transitioning club under head coach Travis Green where core developmental players took a massive step forward.

Despite continued efforts to transition the rest of the Vancouver lineup, the Canucks’ young core – anchored by Elias Pettersson, who deserves serious Hart Trophy consideration, and goaltender Jacob Markstrom, who put together yet another quality season – drove wins all season long.

Markstrom’s 91.8 save percentage was 13th in the league among regular starters, surrounded by other high-end goaltenders like Dallas’ Ben Bishop, Vegas’ Robin Lehner, and Tampa Bay’s Andrei Vasilevskiy. (Adjustments for shot quality faced actually paint Markstrom in a better light, a true testament to the season he had.) And while it’s the best season by raw save percentage that Markstrom has put together in his career, it’s part of an encouraging multi-year trend – one that unfortunately ends with the Swede hitting unrestricted free agency after a career year.

While the core of Vancouver showed strong all season long, the team struggled further down the lineup, and it forced them into a bit of a tenuous playoff position at the time the regular season stopped.

With 13 games left, the Canucks were +11 in goal differential and firmly on the wild-card cutline – the team struggling to find a rhythm on the road (14-18-2), where matchups for their top-six were predictably more difficult. 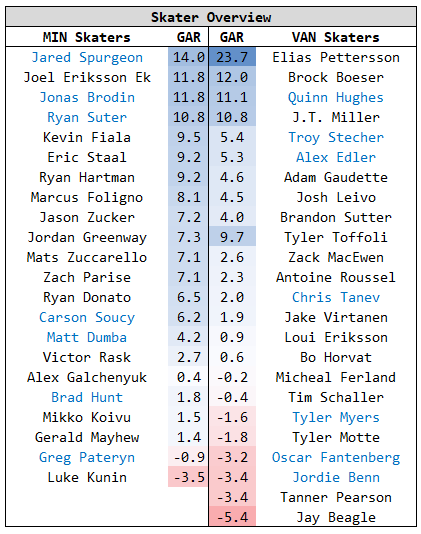 I want to talk about the season second-year pro Pettersson had, especially since mentioning him as a serious Hart Trophy candidate drew anger from fans around the league.

You will notice here that Pettersson’s Goals Above Replacement grade – a regression-based measure which attempts to capture contributions on both ends of the ice – is substantially higher than any other player in the series. In fact, the only players around the league who graded as strongly were obvious stars vying for any number of other end-of-season trophies. That list includes New York’s Artemi Panarin (+24.9 goals), Nashville’s Ryan Ellis (+23.2 goals), Tampa Bay’s Brayden Point (+21.5 goals), and Boston’s Brad Marchand (+20.6 goals).

You might ask why Pettersson shows so favourably here. A lot has to do with the fact that Vancouver’s results were sensational with him on the ice, and the results of Pettersson’s teammates when playing with him were also fantastic. When Pettersson came off the ice, or when those same teammates left his line, it was a completely different story.

Consider just net-goal differentials for this Vancouver lineup. We will isolate on even strength for a moment, though it would be remiss of me not to emphasize that Pettersson was one of three prolific scorers (along with J.T. Miller and Quinn Hughes) on a power play unit that ranked fifth league-wide. Here are how the Vancouver skaters stack up: 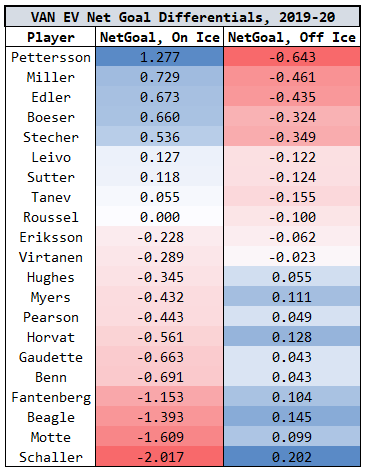 In other words, Pettersson was a +21 goal differential player (EV) on a team that actually finished five goals in the red. And there are a number of other skaters – I mentioned Miller and Hughes earlier for their power play contributions, but forward Brock Boeser and defenceman Alex Edler also had great years – who look really favourable against anyone on the roster, except when compared to Pettersson. Some of this was shooting percentage driven (the Canucks shot 12 per cent at EV with him on the ice, which is quite high), but Pettersson has already shown himself in his second year as an emergent individual sniper – one who could sustain higher individual and on-ice shooting percentages relative to his peers.

The residual parts of Pettersson’s game are also impressive. Pettersson gave Vancouver 22-additional power play – 31 drawn, 9 taken -- opportunities over the course of the season, a number only trumped by Buffalo’s Jack Eichel (+23). Players who run up impressive penalty differentials over the course of the season have a way of adding hidden value to a team that may not be obvious in counting stats; in Pettersson’s case, we can tie nearly a full win in the standings to his ability to draw penalties alone.

In this series, the Pettersson line – he played with Miller and Boeser for most of the season – will likely draw the strength of this Minnesota defence regularly, and that’s the Jared Spurgeon and Ryan Suter pairing. Spurgeon and Suter have been a stable mainstay in Minnesota for a few seasons now, and showed once again in 2019-20 that the Wild are a tough out when they are on the ice. The pairing was +12 in goal differential (+11 in expected goal differential) on a Wild team that couldn’t get a save for most of the regular season.

Something to keep in mind: Suter and Spurgeon play heaps of minutes, more than the vast majority of their defensive colleagues. In the regular season, teams saw them on the ice for about 38 per cent of available shifts. Expect Dean Evason to hit that mark, if not exceed it, in these playoffs.

Over a five-year period (2014-19), Dubnyk stopped 92.0 per cent of shots across all situations. That puts him eighth amongst regular starters, ahead of names like Tampa Bay’s Vasilevskiy and Florida’s Sergei Bobrovsky.

Despite limited playoff success in Minnesota, Dubnyk had become one of the more stable commodities on the roster – so much so that Dubnyk’s 317 appearances in that same timeframe were league-leading, two games ahead of Washington’s Braden Holtby.

So how do we explain Dubnyk’s collapse over 30 games during the 2019-20 season? Only Detroit’s Jimmy Howard had a more difficult time stopping shots, and a lot of that can be chalked up to the overall futility of this year’s Red Wings team. Dubnyk was nearly 16 goals worse than the league average goaltender by raw save percentage, and adjustments for shot quality paint him in an even less favourable light (-28 goals saved above expectations).

If nothing else, it’s opened the door for quite the goaltender competition over the next two months. Evason has already indicated there will be a three-man competition for the net heading into the play-in series, with that competition to include AHL Goaltender of the Year in Kaapo Kahkonen.

The likely bet is we see Alex Stalock in game one and Evason evaluates on the fly. The decision for Vancouver is much simpler. Markstrom will be the guy.

I’m not sure if it’s the most intriguing series, but it has the potential to be the most competitive one. After all, we are talking about two teams separated by one point in the standings and 11 goals after 69 regular-season games.

On the Minnesota side, you have a team with ample playoff experience and a roster that has shown to be a tough nut to crack defensively when they are getting saves from their goaltender.

But it’s hard to pick against the team with the best line, the better goaltender, and a power-play group that has been a bastion of consistency this season. The depth issues beleaguering this Vancouver team may cost them against better competition in the second round, but against a fragmented Minnesota team, that risk is rather mitigated.

The pick is Vancouver in five.