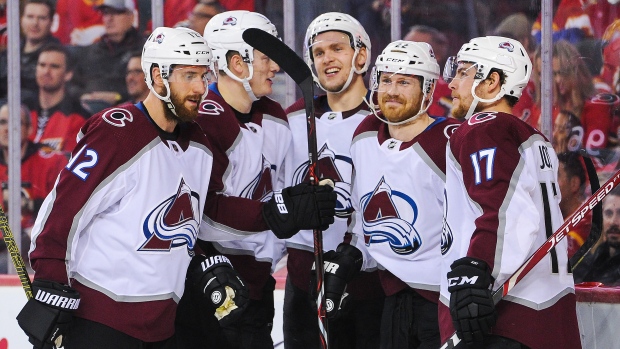 The Colorado Avalanche defeated the Flames 5-1 on Friday to win their first-round series four games to one.

The Avalanche advanced to the second round of playoffs for the first time since 2008.

Calgary topped the Western Conference with a 50-27-7 record, but bowed out to a team that sprinted the final two weeks of the regular season to secure the last wild-card berth.

T.J. Brodie countered for the Flames, with Mike Smith stopping 27 shots in the loss.

The Flames follow the Tampa Bay Lightning in the hasty elimination of a top team from Stanley Cup contention.

The Lightning were swept in four straight by the Columbus Blue Jackets after earning the Presidents' Trophy with the regular season's best record (62-16-4).

Calgary ranked second in goal scoring in the regular season behind the Lightning and tied with San Jose.

But after opening the series with a 4-0 victory, the Flames didn't score more than two goals in any game after that.

The NHL's highest scoring team on home ice this season mustered only one in Game 5 despite head coach Bill Peters juggling his lines in an attempt to spark the offence.

Playoff veteran James Neal was a healthy scratch for the Flames with Austin Czarnik drawing in on the third line for his NHL playoff debut.

Gaudreau, Calgary's top goal scorer, was thwarted in the series.

Gaudreau's penalty shot attempt was unsuccessful, he shot the puck wide on a clear first-period breakaway and had what would have been his first goal of these playoffs waived off for goaltender interference in the second.

Colorado was the more confident team Friday after coming from behind to win both the second and fourth games of the series 3-2 in overtime, and decisively beating Calgary 6-2 in Game 3.

The Avalanche continued to beat Calgary to the puck in all three zones and make the Flames chase and defend.

From the slot, Wilson redirected a MacKinnon shot on Smith stick side for a power-play goal at 14:47 of the second period.

Wilson earned his first at 6:52 when Rantanen blocked a clearing attempt by Calgary's Rasmus Andersson and dished to him in the high slot.

The Flames were outshot 15-9 and trailed 2-1 after the opening period, with Brodie scoring with five seconds remaining to halve the deficit.

The defenceman's wrist shot beat Grubauer top shelf at 19:55 on a feed from Sam Bennett.

When Gaudreau shot the puck wide on a breakaway, the Avs scored on the return trip to make it 2-0 at 15:38.

Rantanen circled out from behind Smith and put the puck off the back of the Calgary netminder to score.

Gaudreau had taken off on a partial breakaway just minutes earlier.

With Barrie and Cale Makar on his back, Gaudreau's backhand was just wide, but he was awarded a penalty shot.

Gaudreau went forehand to backhand, but Grubauer snapped his left pad down to deny him.