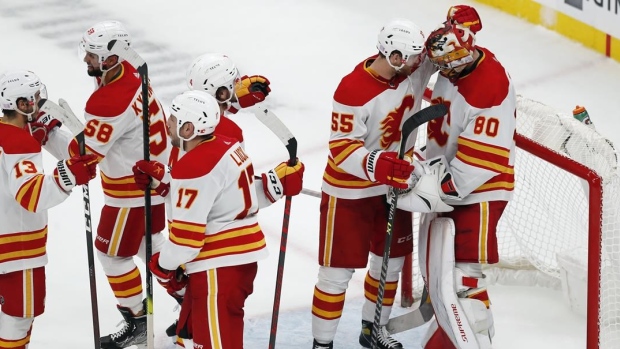 When Calgary Flames players entered the NHL’s COVID-19 protocol en masse in December, they were kept apart for 10 days. All told, more than 30 players and staff had to isolate.

To pass the time, many binge-watched TV shows like Yellowstone and True Story. They played video games, put puzzles together, and worked out at home.

And the team chat went wild.

“Thankfully everyone was okay,” forward Andrew Mangiapane said. “Maybe it brought us closer together as a team now that we went through this. It builds chemistry a little bit.”

The Flames are a close-knit bunch who socialize together, along with their significant others and kids, away from the rink. Blake Coleman and his wife, Jordan, hosted American Thanksgiving, and Erik Gudbranson and Meredith Gaudreau, Johnny’s wife, had a joint 30th birthday party.

Amid one of the best starts in franchise history and with their season suddenly derailed, the chat was vital in players staying connected during self-isolation.

“There were times when you’d take pokes and jabs and make fun of each other, the fun part of being a part of a team,” veteran winger Milan Lucic said. “It was also just checking in on each other and seeing how everyone was doing.”

As more Flames tested positive, the chat got more active.

“We would fire in memes and funny videos and funny jokes that we’d find,” Lucic said. “We had a lot of time on our hands at home.”

Lucic said he’s the most talkative, along with a handful of others.

“The guys that probably stir the pot the most, just because they go at each other, are probably Rasmus [Andersson] and [Andrew] Mangiapane, and even [Mikael] Backlund. [Nikita] Zadorov too.”

Beyond chirping and sharing funny videos and memes, the chat improved players’ mental health during a tough stretch.

“It helps a lot,” Lucic said. “You talk about mental health, sometimes when you’re isolated and by yourself, you can start overthinking things and getting into your own head, which I feel like most of the population has gone through over the last two years. I know I have. When you have people to talk to, you have that camaraderie, you have people to reach out to and joke around with and be loose with, it really takes away from overthinking things and getting into your own head and start thinking about why this and why that, negative things. It snowballs and you can go down a dark path.

“You have people that you can rely on and count on and keep things loose and positive and happy. A lot of the chat is happy conversations, it’s positive conversations and happy joking around. It keeps you in the right frame of mind and in a positive, optimistic state of mind.”

So, what would a diehard Flames fan’s first impression be if they ever got a transcript of the chat?

“A guy that’s pretty quiet but is pretty funny and active is Chris Tanev,” Lucic said. “He’s very witty, smart, and funny. He’s more quality than quantity as far as jokes. That’s what I think Flames fans would be most surprised by. He’s got the college wittiness to him.”

One of the most-shared pictures was a newspaper graphic that compared the Flames’ outbreak to the Netflix series Squid Game.

“That was probably one of the funniest, because at that time, Squid Game was kind of a thing,” Lucic said. “We were like, ‘Oh what is this, The Hunger Games?’ That was the funny highlight that got it started with more memes.”

Over the past few months, the Flames have bonded in a way that was not allowed last season.

“The difference between last year and this year is that we’ve gotten a chance to hang out together, to go out for dinner together,” Lucic said. “That’s a big part of our team, that off-ice contributes to the on-ice.”

With COVID-19 (hopefully) in the team’s rear-view mirror, the Flames are focused on trying to continue one of the league’s feel-good stories of the season.

The team is on pace for 98 points, which would be one of their best seasons since the 2004 lockout. That off-ice camaraderie is a huge strength of the team and could lead it to greater heights.

“We like each other and enjoy each other,” Lucic said. “Whenever we get a chance, if it’s a birthday or milestone, or even one of the guys’ significant other’s or kids’ birthdays, Thanksgiving, whenever we get a chance to do something like that together, the turnout is, if not 100 per cent, then close to it and everyone enjoys it. That’s what makes teams become good teams, because they care about each other, and this team definitely has that.”

The impact of those relationships go far beyond what happens at the Saddledome.

“That’s why it’s important when you have a group like this that’s willing to talk to each other and reach out to each other,” Lucic said. “That’s huge, especially given what we’ve all been through in the last two years. It definitely helps and makes things better.”