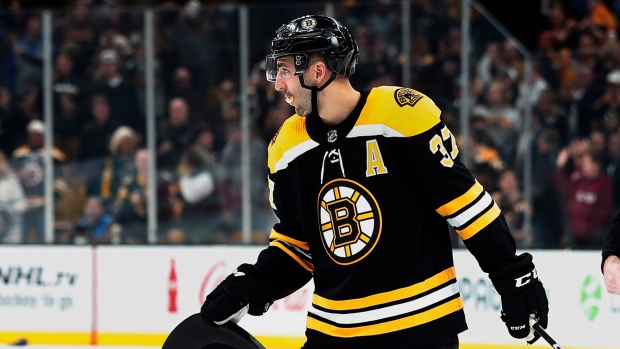 "To be Captain of an Original Six franchise is an honor, and a role that comes with much responsibility to his teammates and the fans," said Bruins Owner Jeremy Jacobs. "There is no doubt in my mind that Patrice is the natural successor to the Captain role, and he will represent this franchise very well. He has consistently and reliably contributed to this team's advancement and has been an adept leader for many years, both on and off the ice. His tenure as Captain will be one of great success."

Bergeron is entering his 17th season with the Boston Bruins. The 35-year-old posted 31 goals and 56 points in 61 games last season.

"Throughout Patrice Bergeron's historic career with the Boston Bruins, he has carried himself with great integrity, humility and resiliency," said Bruins CEO Charlie Jacobs, "These qualities make Patrice a natural leader and an obvious choice as to who should serve as the next Captain of the Boston Bruins. We are incredibly proud to have Patrice fill this important role and look forward to watching him lead the locker room this season and beyond."

"It's a privilege to name Patrice the 20th Captain of the Boston Bruins," said Bruins President Cam Neely. "For 16 seasons we have all watched Patrice grow not only into an elite player but also a tremendous leader. Patrice represents the Bruins organization and our fans with integrity, determination and class. On and off the ice he embodies what it means to be a Bruin, and we couldn't be prouder that he will lead our team as Captain."

A second-round draft pick of the Bruins in 2003, Bergeron is a four-time Selke Trophy winner and won the King Clancy Memorial Trophy in 2013.

"It is with great privilege that we present Patrice Bergeron as the 20th Captain of the Boston Bruins," said Bruins General Manager Don Sweeney. "Patrice Bergeron exudes leadership, character, talent, will and empathy. We all know Bergy embraces the legacy of the Boston Bruins, as he will with the Captaincy. Bergy has earned the respect of all of his teammates, coaches and everyone in the Bruins organization. Congratulations to Patrice, Stephanie, Zack, Victoria and Noah."