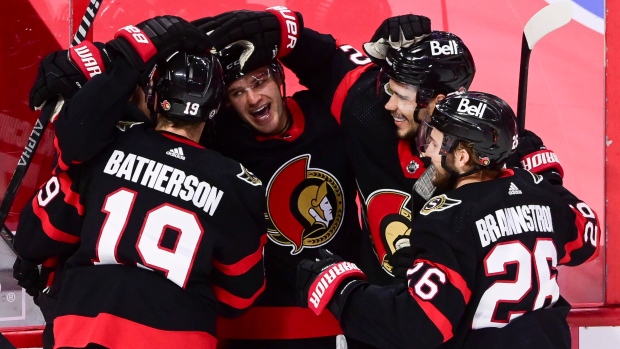 OTTAWA — The Ottawa Senators moved out of the North Division basement in style Wednesday, with Brady Tkachuk recording a Gordie Howe hat trick in a convincing 6-3 win over the Vancouver Canucks.

Tkachuk was happier at the two points than posting the goal-assist-fight trifecta.

"I'm not going to lie to you, it was pretty cool," he said of the Howe hat trick. "I've definitely had opportunities beforehand. I just haven't got it done.

"I wouldn't really call that one a fight," he said, referencing a short bout with Zack MacEwen. "I'm more happy with the outcome and how we played. We played a full 60 (minutes), just a great game top to bottom. Now we're just kind of showing our true colours right now. We're a fun team to watch. It's fun to be a part of right now. Like I've been saying all year we've learned a lot and that's why success is following."

Tyler Myers, Jake Virtanen and Brandon Sutter replied for a tired Vancouver, which needed goaltender Thatcher Demko to keep the score from ballooning. The Canucks have lost three of four.

"it wasn't a very good one from our group," Myers said of the Vancouver performance. "I thought any time we were generating momentum, we just kind of shot ourselves in the foot. A few too many turnovers, not making the right decisions at the lines and it ended up costing us."

"We had a lot of good efforts by a lot of guys," said Ottawa coach D.J. Smith. "It looked like we had pretty good legs and they didn't have very good legs tonight compared to the other games we've played them.

"Obviously this many games for them in a row with travel probably played into it."

It was the fourth straight meeting between the two teams in seven days. Ottawa won the first and third, by 3-0 and 2-1 scores, with Vancouver taking the second, 4-2.

Tkachuk dropped the gloves with MacEwen eight minutes into the game after the Canucks forward objected to Tkachuk flattening Sutter behind the goal.

The abrasive Senators forward added an assist on Norris' goal that made it 3-0 just 70 seconds into the second period. Tkachuk intercepted an errant J.T. Miller pass in the Vancouver end and sent the puck at the net. When it came back to him, he beat two Canucks to feed Norris in front of goal for his 15th of the season.

Tkachuk, a six-foot-four 211-pounder, completed the Howe hat trick with a goal of his own at 16:13 of the second, thanks to a line change that allowed him to go in alone and beat Demko glove-side for a 5-2 lead with his 16th of the season.

Down by three and needing points to stay alive in the playoff race, the Canucks pulled Demko with 7:20 remaining. He returned less than a minute late as the Sens just missed the empty net.

White added an empty-net goal at 14:33 of the period when Demko went to the bench again, making it 6-2. It was his 10th of the season.

Vancouver gave Demko his second start since the team returned to action after the COVID outbreak. Braden Holtby had started four of the five previous games.

Mete, acquired April 12 on waivers from Montreal, opened the scoring on Ottawa's first shot of the game. Taking a pass from Alex Formenton, he split the defence and beat Demko with a low shot at 2:04 for his first point as a Senator.

While the edge in shots was only 11-10 in favour of the Senators after the first period, Ottawa goaltender Marcus Hogberg had a far more comfortable 20 minutes than Demko.

The second period was all action with five goals — three for Ottawa and two for Vancouver — in the first seven minutes 23 seconds.

Tierney and Norris scored 32 seconds apart as the bottom fell apart early in the second for Vancouver.

Vancouver's Travis Hamonic and Ottawa's Nick Paul fought midway through the third period. Paul got an extra penalty for removing his helmet during the brouhaha.

Demko made several great saves to deny Ottawa as the Senators pressed shorthanded. Sutter added a consolation goal for Vancouver at 17:43.

This report by The Canadian Press was first published April 28, 2021