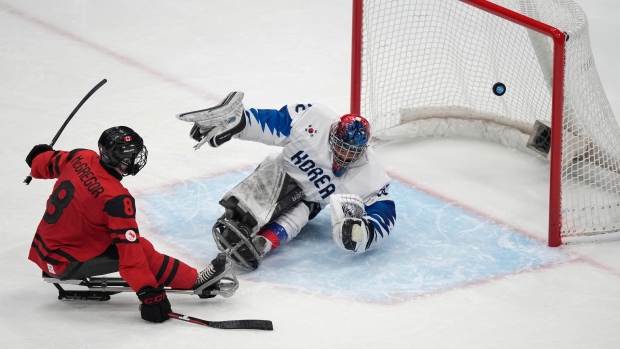 Billy Bridges had a hat trick as Canada routed South Korea 11-0 in a semifinal on Friday.

Canada will play the United States for gold on Saturday after the Americans beat China 11-0 in the other semifinal.

“I am proud of the way our group played today," said McGregor, who turned 28 on Friday. "We had contributions from everyone; even guys that will not show up on the scoresheet still made an impact by blocking shots and killing penalties.

“Everyone is feeling really good about themselves and about the team, and that is very important heading into a gold medal game.”

Bridges reached the 50-point plateau at the Paralympics and now has 199 career goals for Team Canada.

Liam Hickey scored and added four assists for Canada and Garrett Riley had his first goal with Team Canada.

Greg Westlake and Anton Jacobs-Webb rounded out the scoring.

Dominic Larocque made one save through the first two periods before giving way to Adam Kingsmill, who made two stops in the third. Canada outshot South Korea 43-3.

“We need to be consistent and keep doing what we have been doing,” Canada head coach Ken Babey said. “We need to rely on our defensive structure to shut down scoring opportunities from either team we could play in the gold medal game. When we shut other teams down defensively, we are able to create offence, and that is what we have been preaching to our players.

"For the most part, we have been very consistent with that, and we have continued to get better every day. We are excited for the chance to play for a Paralympic gold medal.”