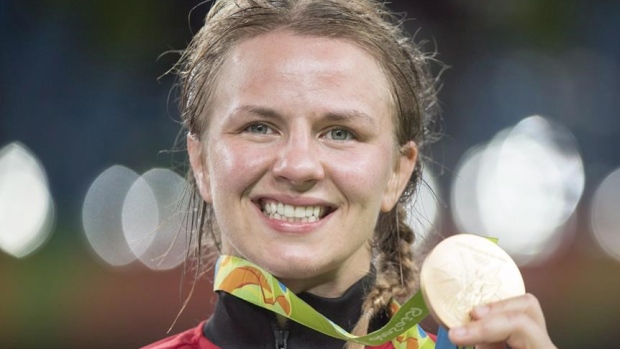 Canadian athletes feel a mixed bag of emotions a year out, again, from the Tokyo Olympic Games.

Amid the upheaval the COVID-19 pandemic unleashed upon their lives, the postponed Summer Games is the North Star to which they affix their hopes and dreams.

Athletes who will be on Canada's Olympic team in 2021 have returned to training at different levels depending on their sport. Track and field athletes, such as sprint star Andre De Grasse, have begun competing. Cycling Canada intends to name its Olympic track and road teams next week.

As athletes reboot their competitive lives, optimism battles pessimism over whether the Olympic torch will actually ignite July 23, 2021.

Tokyo's organizing committee president indicated Wednesday the world must get the virus under control with a vaccine or drugs in order for the Games to go ahead.

"I am still only like 60 to 70 per cent certain there's going to be a Games next year," racewalker Evan Dunfee told The Canadian Press

"I've definitely struggled with the notion of 'OK, if there's a Games without fans or spectators, is that something that should happen?' So, that's sort of been, yeah, the internal conversation I've had."

She tries to avoid going down the rabbit hole of what-ifs.

"I've just been trying to go into every day with that kind of affirmation of whatever comes with the day, I'm still on my own path," Wiebe said.

"Never in a million years could I have imagined that I would have to overcome the challenge of a global pandemic and Olympic postponement, and all the things that it's entailed."

Rugby player Britt Benn's life plan was to retire after the 2020 Games and start a career as a firefighter. The 31-year-old, who helped Canada win bronze in 2016, deliberated at home in Napanee, Ont., before boarding a plane to Victoria.

"I want to pursue another Olympics," Benn said. "I can't throw in the towel a year out. It would be a lifetime full of regret if I did that."

There's opportunity in the unprecedented postponement, including extra months of rest and recovery for the injured or those who log a lot of mileage.

"I certainly feel like I'm going to be better off with the Games being next year, said Dunfee, winner of a world championship bronze medal last October in the 50k.

"Whether or not that's real, it doesn't really matter. I've convinced myself that it's true and therefore it will be true."

There's also more time for athletes to play themselves onto a Tokyo-bound team. Eight teams have qualified so far.

Canadian field hockey captain Scott Tupper of Vancouver says the Olympic roster is usually solidified five or six weeks out from the Games.

"I think for certain individuals, it kind of changes the landscape," Tupper said. "Guys who would have liked to maybe be part of the training group and have that sort of experience leading up are now looking at it like they want to be one of our 16 guys that go, and really push for selection."

Own The Podium chief executive officer Anne Merklinger hopes summer sport federations take advantage of a fifth year in what is usually a quadrennial to boost performance in Tokyo.

"What it did allow us to do is to re-engage with sports with a lens of 'well, we've got a chance to repeat Year 4, so what were the gaps that were identified over the course of the year that we can address heading into a new Year 4?'" she said.

"It wasn't just a question of rinse and repeat."

The Canadian Olympic Committee continues to prep athletes for the Games environment and marshall resources to look after them the ground in Tokyo.

Shoemaker says the COC's 27 corporate partners remain on board to help pay for the Canadian team in Tokyo.

"Their support for Team Canada has not wavered," he stated.

The Canadian taxpayer is the biggest financial supporter of Canada's Olympians and Paralympians to the tune of about $200 million annually.

In addition to providing technical expertise to sport federations, OTP directs roughly $70 million — $9 million of from the COC — to winter and summer Olympic and Paralympic sport annually based on medal potential.

The federal government announced $72 million in pandemic relief for national and provincial sport organizations in May.

Canada's goal in Tokyo remains to better the 22 medals won in 2016. That equalled the most for Canada at a non-boycotted Summer Games after Atlanta in 1996.

World championship results are an indicator of medal potential.

Canada has won 23 medals in summer sport world championships over the last four years, compared to 20 in the quadrennial prior to Rio.

De Grasse, swimmer Penny Oleksiak, trampolinist Rosie MacLennan, tennis player Bianca Andreescu and golfer Brooke Henderson will be the faces of the Canadian team in 2021 should the Games go ahead.

An international data analytics company is less bullish on Canada's podium prospects in Tokyo, however.

Gracenote predicted 21 medals — five gold, nine silver and seven bronze — and a rank of 13th for Canada on Feb. 24 before the virus essentially shut down global sport.

The company that delivers music, video and sports data to entertainment services and companies had predicted 25 medals for Canada, including six gold, in July of 2019.

Canada declared it would not send a team to Tokyo this summer two days before the International Olympic Committee and organizers postponed the Games.

Canadian athletes desperately want those aspirations realized a year from now, however.

"I'm just kind of hoping and praying that going into 2021, we can have some kind of regular season here," said shotputter Brittany Crew of Mississauga, Ont.

"And I hope that we can actually have the Olympics, because I don't think without a vaccine, we're going to have an Olympics."

Note to readers: This is a corrected story. A previous version misidentified Erica Wiebe's hometown of Stittsville, Ont.