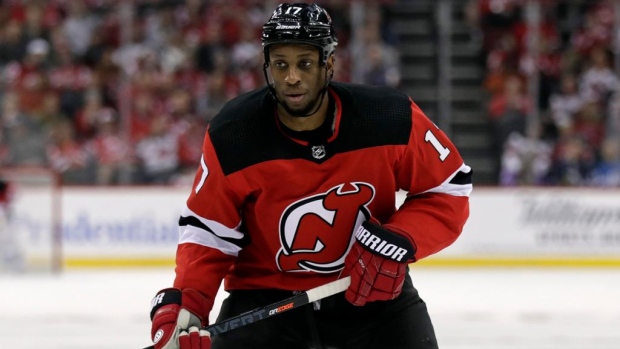 TSN Hockey Insider Pierre LeBrun reported the Vancouver Canucks tried to acquire forward Wayne Simmonds from the New Jersey Devils the last few days but couldn't make it work cap-wise, perhaps because Brock Boeser could return before the end of the regular season. LeBrun added as of now, Simmonds is not as likely an option for the Canucks.

The 31-year-old Simmonds is on a one-year, $5 million deal with the Devils. In 59 games for the Devils this season, Simmonds has seven goals and 16 assists.

According to TSN Hockey Insider Pierre LeBrun, the Carolina Hurricanes are interested in adding right-shot, top-four defenceman preferably with term before the deadline. And Montreal Canadiens defenceman Jeff Petry, who fits the bill on all three counts, is high on their wish list.

LeBrun cites a source who believes there's a 95 per cent chance the Canadiens hold on to Petry, who's signed through next season at a $5.5 million cap hit. But he wonders if Carolina could entice Montreal general manager Marc Bergevin into making a deal.

LeBrun believes the Hurricanes could package a first-round pick and defensive prospect Jake Bean in exchange for Petry. He adds, however, that the Canadiens would likely decline that offer because the team does not view Bean as a top-four defenceman in the future.

Bean, selected 13th overall in 2013,  has seven goals and 38 points in 49 games with the AHL's Charlotte Checkers this season and played two games last season with the Hurricanes.

Petry, who has nine goals and 36 points in 62 games this season, is listed at No. 49 on the Trade Bait board. LeBrun adds that the Canadiens will need to be "overwhelmed by an offer" to move him before Monday's deadline.

The Vegas Golden Knights acquired veteran defenceman Alec Martinez for two second-round picks on Wednesday, but the team could strike again before Monday's deadline - with another addition to their blueline.

Jesse Granger of The Athletic reports the Golden Knights have also shown interest in Chicago Blackhawks pending unrestricted free agent Erik Gustafsson and argues the team should make a move to bring in the offensive defenceman.

Gustafsson, who is the second-highest ranked defenceman on the Trade Bait board at No. 8, has six goals and 26 points in 59 games this season. While acquiring Martinez should help the Golden Knights in their own end, Granger argues Gustafsson could fill a void as a puck-moving defenceman on the team's third-pairing. Golden Knight general manager Kelly McCrimmon did not rule out making another trade after Wednesday's move to add Martinez.

“This was a move that we have considered for a long time, and we identified this as a way we really wanted to improve our team, was to add a defenceman of this caliber,” McCrimmon said. “That’s why we worked really hard to finalize and determine what the price was going to be at the deadline. We’ll do a reset now, and then we’ll work right to the deadline on Monday to see if there are any other moves out there that could help us, that make sense.”

Granger notes that the Golden Knights should be able to fit Gustafsson's expiring $1.2 million cap hit, but he adds that Blackhawks general manager Stan Bowman is currently looking for a first-round pick in return at the moment. He believes Vegas, meanwhile, would be willing to part with a second-round pick in a deal for the blueliner, and notes Bowman's price is expected to drop before 3pm et on Monday.

Washington Capitals goaltender Braden Holtby may be playing on an expiring deal, but general manager Brian MacLellan said once again Wednesday that the veteran will not be on the move at the deadline.

"I think our story's been the same the whole year, that he's our guy and we're going to try to compete for a [Stanley] Cup," MacLellan told NHL.com. "I think we want him at the top of his game at the end of the year."

Holtby has a 21-13-4 record this season with a .897 save percentage and a 3.11 goals-against average. He's been pushed for starts this season by 22-year-old rookie Ilya Samsonov, who has 16-4-1 record with a .917 save percentage and a 2.38 GAA. The 30-year-old, however, remains the team's starter and is expected to make his fourth straight start on Thursday against the Montreal Canadiens.

A fourth-round draft pick in 2008, Holtby has spent his entire career with the Capitals and backstopped the team to a Stanley Cup in 2018. He's currently playing out the final season of a five-year, $30.5 million contract signed in 2015 and carries a $6.1 million cap hit for his season.

The Capitals made their first move ahead of the deadline on Tuesday, acquiring Brenden Dillon from the San Jose Sharks. MacLellan noted, however, that he remains open to potentially making more moves before the deadline.

"I don't know. How do you anticipate?" MacLellan said. "Sometimes calls come in and are unexpected and bring up things. It's tough to say 'This is what we're going to do,' but we're going to be open to whatever conversations we have."

Tom Gulitti of NHL.com writes the Captials would like to add a forward, and with Dillon now in the fold, the team could give up a defenceman in a move to upgrade their offence.

"I'd consider anything if it makes sense for us," the general manager added. "We'll continue to talk to teams. If that's an option, I'm already pursuing it."

The injuries are piling up for the Colorado Avalanche, but it does not appear that will sway general manager Joe Sakic into making move before the trade deadline.

“The (injuries) won’t change anything. The only thing we might do is look for a depth goaltender, to protect ourselves,” Sakic told Altitude TV during the intermission of his team's 3-1 win over the New York Islanders, per Colorado Hockey Now.

The Avalanche are without goaltender Philipp Grubauer, in addition to forwards Mikko Rantanen, Nazem Kadri and Matt Calvert. Robin Lehner of the Chicago Blackhawks is the lone goaltender on the TSN Trade Bait board and the 2019 Vezina Trophy finalist would qualify as more than a "depth" piece.

Sakic stated Wednesday that he's unwilling to part with any of the team's top prospects, such as Bowen Byram or Conor Timmins, in order to boost his team's chances this season.

“We know what we’d like to add, but we know what we’re not willing to part with,” Sakic said. “Over the last, I don’t know how many years, it hasn’t paid off for a lot of teams, just giving up assets for a run. We feel we’ve got a deep team here and more than content in staying with it. But, it’s my job to see what else we can maybe do here.”

Sakic did reveal, though, that the team could look to add players who are a “good fit in our dressing room... impact players,” to help his youthful squad in their postseason pursuit.

With Wednesday's victory, the Avalanche sit third in the Pacific Division and are just one point back of the St. Louis Blues for first in the conference.