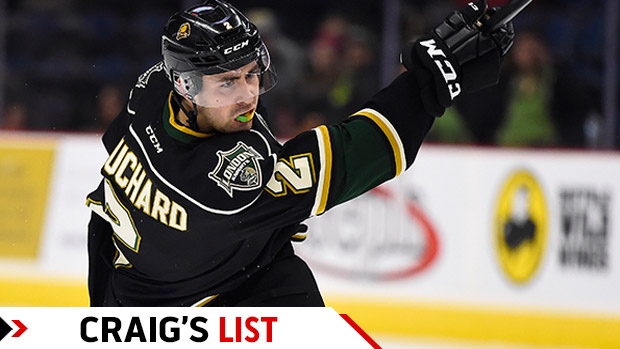 Swedish defenceman Rasmus Dahlin continues to be far and away the top prospect in the March edition of Craig’s List ahead of the 2018 NHL Draft, but London Knights captain Evan Bouchard has forced his way into the top five of our rankings and could be the second blueliner off the board.

Bouchard, a 6-foot-1, 195-pound native of Oakville, Ont., sat in 23rd place in the September edition of our rankings. The right-shot blueliner then turned in a stellar regular season in London, racking up 87 points (25 goals, 62 assists) in 67 games to lead all OHL defenceman in scoring.

Along the way, he climbed to No. 20 in our November list, to No. 10 in our January rankings and now sits fifth.

The highest-ranked Canadian on our board, Bouchard is a fantastic passer who projects as true power-play quarterback at the next level. He has also been counted on to log north of the 30 minutes a night for a Knights team that traded away a number of key veterans during the season.

Three familiar wingers occupy the spots between Dahlin and Bouchard. Boston University left winger Brady Tkachuk, who has eight goals and 21 assists in 38 games in his freshman season, is our No. 2 prospect. Barrie Colts right wing Andrei Svechnikov, who had 40 goals and 32 assists in an injury-shortened regular season (44 games) is third. Sitting in fourth is Filip Zadina of the Halifax Mooseheads, a right wing who had 82 points (44 goals, 38 assists) in 57 games this season.

All three of these wingers bring a blend of size and skill and project to be productive pros. They could be drafted in any order behind Dahlin.

Sitting at No. 10 is 6-foot-1, 188-pound Finish centre Jesperi Kotkaniemi, who jumps all the way up from No. 26 in our January rankings. The 17-year-old Kotkaniemi, who is playing against men in Liiga for Assat, reminds me of Los Angeles Kings captain Anze Kopitar at the same age.

Note: If I haven’t seen a player at least four times, they don’t get evaluated. That’s why highly rated players like German winger Dominik Bokk and Russian forward Vitaly Kravtsov aren’t in this month’s rankings.