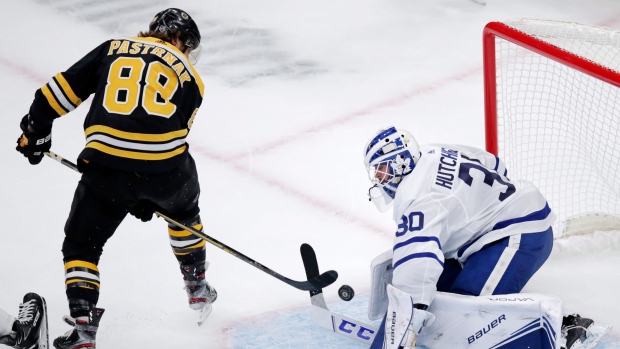 BOSTON — After losing a goal to an offside call midway through the first period, David Pastrnak got it right back with a pass to himself between his own legs.

This one counted for Pastrnak, who scored his league-leading 10th of the season and added an assist for the Bruins in a 4-2 win over the Toronto Maple Leafs on Tuesday night.

"I tried it a couple times in practice but it didn't work. It worked today, so I was kind of lucky," said Pastrnak, who reached 300 career points with the goal.

Brett Ritchie and Par Lindholm also scored for Boston, which was playing for the first time since a 4-3 loss in overtime at Toronto on Saturday night. Tuukka Rask made 28 saves in his 500th career game.

Pastrnak appeared to score on a rebound at 10:48 in the first, but the goal was waved off after Toronto challenged and replay showed the play was offside.

Pastrnak scored one that counted with 2:45 left in the first with some nifty stickhandling in front of the Toronto net. After taking a pass from Marchand, Pastrnak slipped the puck between his own legs, then redirected it past Michael Hutchinson to give the a 1-0 lead.

"There's times through the year when pucks bounce against you and there's times when they bounce for you. Right now pucks are bouncing his way," Marchand said of Pastrnak. "He has that ability to make those high-end plays. He puts himself in really good positions to capitalize on opportunities."

Pastrnak said the Bruins didn't let up despite the disappointment from having their first goal waved off.

"I knew we were going to get another one. We were feeling good," he said.

Kasperi Kapanen and Alexander Kerfoot had a goal and assist apiece for the Maple Leafs, who were coming off an overtime loss to Columbus at home on Monday night.

Coach Mike Babcock said the Leafs improved from the night before, when they led 3-2 after the second but couldn't hold off the Blue Jackets in the third, then the OT.

"It was one of those games. It was a grind the whole thing. There wasn't much room for either team," Babcock said. "In the end, the game was right there in the third period. . We were unable to get it done."

The Maple Leafs tied after falling behind 1-0 and 2-1, but couldn't get anything past Rask in the third period.

"I just don't think we spent enough times in the offence zone and weren't heavy enough on pucks. They kept on breaking out and applying pressure on our D," Kapanen said. "We spent a lot of time in our own zone and eventually they're going to score when the flow of the game goes like that."

Ritchie's unassisted goal 6:35 into the third put Boston back up 3-2 and Lindholm got his first of the season when he poked in a rebound with 2:03 left in the game.

Kapanen tied it on a one-timer off a crossing pass from Kerfoot with just under 4 1/2 minutes into the middle period. Marchand's goal put Boston up 2-1 at 6:09, as Pastrnak got another point with an assist.

NOTES: The Bruins beat the Maple Leafs for the 300th time, the most victories for Boston over any opponent. ... Rask, the first Boston goalie to play in 500 games with the club, clapped and waved to the crowd when he was recognized for the milestone during a time out in the first period. ... Bruce Cassidy coached his 200th game with the Bruins. ... Marchand has points in eight straight games. ... Toronto fell to 0-2-1 in the second of back-to-back games.

Bruins: Host St. Louis on Saturday night in a rematch of the 2019 Stanley Cup Final.