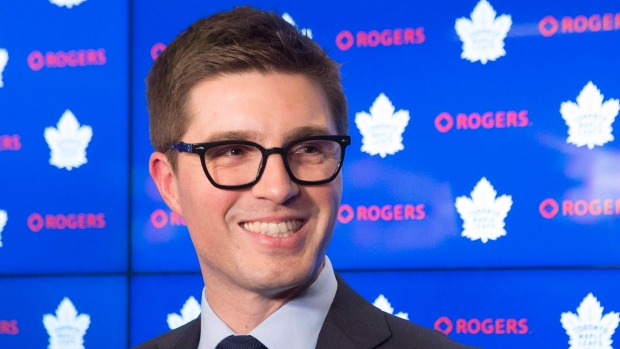 While many on social media pointed to Dubas scouting players for a potential trade, TSN Hockey Insider Bob McKenzie suggested there could be another explanation for Dubas' trip to the Big Apple.

"While many are trying to connect the potential trade dots on TOR GM Kyle Dubas being at last night’s NYR-CGY game at MSG, which I suppose is possible, it’s worth noting two things: 1. William Nylander’s agent Lewis Gross lives in Manhattan. 2. Dubas likes to go to hockey games," McKenzie wrote on Twitter on Monday morning.

More cloak and dagger work uncovers Dubas and Nylander's agent, Lewis Gross were seen talking before the Flames/NYR game last night. Have to believe that is why Dubas was there. https://t.co/fV2KYP8gnn

Dubas travelled to Switzerland last week for a one-on-one talk with Nylander last Wednesday and meeting with Gross could be the general manager's latest move as he tries to re-sign the restricted free agent.

Dreger reported last week that the face-to-face meeting in Europe was focused towards Nylander's place with the franchise, not contract specifics.

"It doesn't sound like they exchanged numbers," Dreger told First Up on TSN Radio 1050 Toronto. "So he offered something, and my belief is that he offered an assurance that the plan is not to come to terms on a contract, extend William Nylander, bring him back to North America and then trade him off.

"I think the assurance came in the form of, ‘Look, you're a big part of the future of the Toronto Maple Leafs – both the near future and long-term as well. So, let's figure this out collectively. If the long-term doesn't make sense from a numbers perspective, if you're unwilling to budge – and [Nylander] really hasn't been willing to budge to this point – then maybe let's focus on a two-to-three year bridge deal.’

"That's what we believe took place, but as I said, it doesn't sound like there were numbers exchanged."

The Maple Leafs (6-3) have lost their past two games and will take on the Winnipeg Jets on Wednesday.