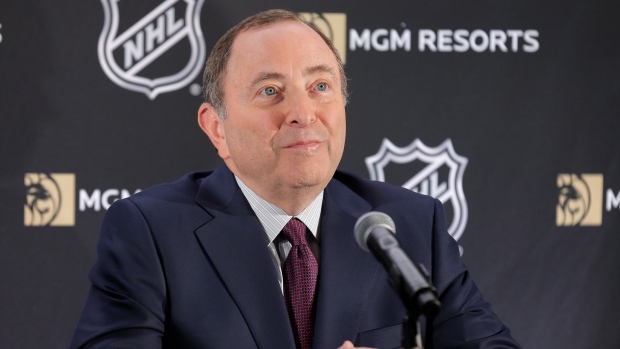 NHL commissioner Gary Bettman is expected to confirm the worst-kept secret in hockey on Tuesday — the league will be expanding to Seattle.

Approval of the city's bid to become the NHL's 32nd franchise needs support from 3/4 of the board of governors, who are set to meet this week in Sea Island, Ga.

Barring something completely unforeseen, Seattle appears to be a slam dunk.

There's a deep-pocketed ownership group fronted by majority stakeholder David Bonderman and Hollywood producer Jerry Bruckheimer, the US$650-million expansion fee and an opportunity to balance the league with 16 teams in each conference.

Two big unknowns remain heading into the board meetings scheduled for Monday and Tuesday, however.

When will Seattle actually hit the ice and how will the NHL realign two of its four divisions?

KeyArena, which was home to the NBA's SuperSonics before they moved to Oklahoma City in 2008, is primed to undergo a massive $700-million renovation, but it's unclear if the project will be finished in time for the start of 2020-21 NHL season.

"The potential club ownership is very much interested in starting in 2020-21," NHL deputy commissioner Bill Daly said last month at the Hockey Hall of Fame induction ceremony in Toronto. "But their arena timeline continues to be a little too tight for that, so we'll see whether they can move that up or change that."

If the facility isn't ready, the league would prefer Seattle's inaugural campaign be pushed back until 2021-22 rather than have the new team play temporarily at a different venue.

"They have floated the idea of potentially using an alternate site for the first couple weeks of the (2020-21) season," Daly added. "It's not ideal."

There's also the possibility of an NHL work stoppage in the fall of 2020, but Bettman has said the arena hurdle is the biggest obstacle facing a 2020 start date for Seattle, which has sold 32,000 season-ticket deposits, including the 10,000 purchased in the drive's first 12 minutes.

"They have a lot of work to do initially," Bettman told reporters in New York back in October after the ownership group made a presentation to the board's executive committee. "Everybody's goal is 2020 if it can be accomplished. If it's not, then we'll do it in '21."

Whether it's 2020 or 2021, with the current setup of 15 teams in the Western Conference, some shuffling will be required once Seattle joins the NHL's party.

The new franchise looks tabbed for the Pacific Division — the Vancouver Canucks are an obvious geographic rival, just a three-hour drive north — meaning one of the other seven teams currently in the Pacific would have to move to the Central.

At this point, the Arizona Coyotes seem the most likely candidates to make the switch.

The Golden Knights, who paid a $500-million expansion fee compared to Seattle's $650-million price tag, stunned the hockey world in their inaugural season, making it all the way to last spring's Stanley Cup final.