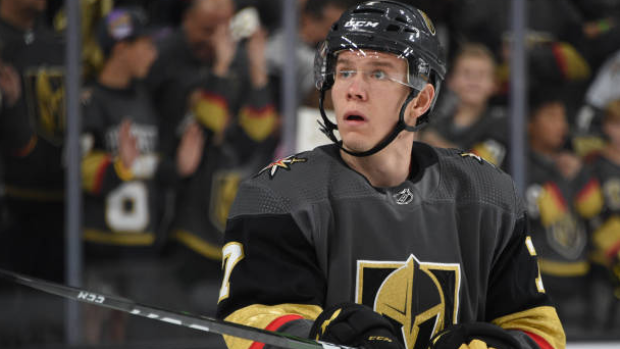 Zykov can appeal the suspension.

The 24-year-old has two assists in seven games with the Golden Knights this season. He appeared in 28 games last season with the Carolina Hurricanes, Edmonton Oilers and Golden Knights, posting two goals and five points.

“I’ve been informed that I am being suspended for 20 games under the NHL/NHLPA Performance Enhancing Substances Program," Zykov said in a statement. "While I haven’t been able to discover how I tested positive, I understand that I am responsible for what is in my body and will accept this penalty. I want to apologize to my family, my teammates, and the Golden Knights organization and fans. I will work hard during my suspension to ensure that I put myself in the best possible position to contribute to my team when my suspension is over.”

Zykov says he isn’t sure how he tested positive according to a statement issued by the NHLPA. Vegas isn’t backing off its position Zykov “knowingly” took a banned substance. He can appeal the 20 gm suspension.

The Golden Knights issued the following statement on the suspension Thursday:

"We were notified by the NHL and NHLPA that Valentin has violated the terms of the NHL/NHLPA Performance Enhancing Substances Program. We monitor the nutrition, supplement intake, and overall diet of our athletes on a continual basis throughout our entire season. Valentin knowingly used a banned substance without the consent, recommendation or knowledge of our team. We support the NHL/NHLPA Performance Enhancing Substances Program and respect the decision here."

The Russian winger was drafted in the second round of the 2013 NHL Draft by the Los Angeles Kings. He was has six goals and 15 points in 47 games since debuting in the league with the Hurricanes in 2016-17.

Zykov is just the fifth player since 2014 to be suspended for performance enhancing substances. Golden Knights defenceman Nate Schmidt was previously the most recent player to be suspended under the policy, receiving a 20-game ban last September.

Under the terms of the Collective Bargaining Agreement, the suspension is accompanied by mandatory referral to the NHL/NHLPA Program for Substance Abuse and Behavioral Health for evaluation and possible treatment.