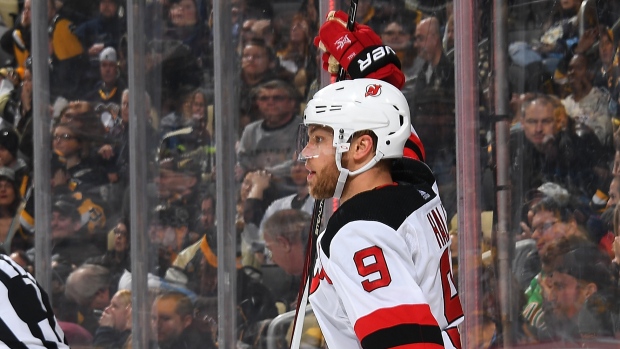 PITTSBURGH — The New Jersey Devils and their roster stuffed with speed and youth haven't made the playoffs in six years. The drought for Taylor Hall is even longer. Eight years after being taken with the top pick in the draft, the Devils forward is still waiting for his first taste of the NHL post-season.

It may almost be over.

Hall raced in alone and beat Matt Murray on a breakaway 27 seconds into overtime to lift the Devils to a 4-3 victory over the Pittsburgh Penguins on Friday night and give their push for the last wild-card spot in the Eastern Conference a boost. New Jersey is now three points clear of ninth-place Florida with just over two weeks to go in the regular season.

Pittsburgh's Brian Dumoulin and Phil Kessel scored in the third to erase a two-goal deficit and force overtime but Hall handed the Penguins just their second loss in their last 17 home games when he loitered near the Penguins' blue line, waited for an outlet pass from 19-year-old Nico Hischier then slipped a shot between Murray's legs for his 33rd goal of the season.

"I saw a chance to take off a little bit and get behind them," Hall said. "I was just hoping Nico was going to win his battle and, sure enough, he did."

Hall added two assists for New Jersey. Hischier finished with a goal and an assist, and Blake Coleman and Will Butcher also scored for the Devils. Keith Kincaid made 40 stops for the Devils, including 14 in the third period as Pittsburgh dominated.

"It's difficult to beat a team like Pittsburgh if you don't get excellent goaltending because they're so dynamic, they have so many weapons in their lineup that you know they're going to get looks at certain times regardless of what you do and Keith came up with some big, big saves, particularly in the third period late," Devils coach John Hynes said.

Sidney Crosby scored his 25th of the season for Pittsburgh. Murray finished with 30 saves as the Penguins pulled within three points of Washington for the top spot in the Metropolitan Division. Pittsburgh, however, missed an opportunity during a lethargic second period in which the Devils scored three times. Though they managed to get to the extra period, the Penguins understand they let a chance to beat New Jersey for the first time in three meetings this season slip away.

As good as they were early and late, they were messy in the middle.

"We have mental lapses for short periods of time and it's costing us and you can't have that this time of year," Pittsburgh coach Mike Sullivan said.

New Jersey's drive to reach the playoffs for the first time since 2012 has been bumpy of late. A lopsided loss in San Jose dropped the Devils to just 13-12 since Jan. 30 and skated onto the ice at PPG Paints Arena with a tenuous grasp on a playoff spot.

Yet whatever issues the Devils have seem to disappear when they play the two-time defending Stanley Cup champions. New Jersey is unbeaten against the Penguins this season, often beating Pittsburgh at its own game by relying heavily on speed to create mismatches.

Crosby's goal 2:29 into the game put Pittsburgh in front Butcher's sizzling wrist shot from above the left circle 5:15 into the second tied it. When the Penguins failed to convert a 3-on-1, Coleman countered by holding off Pittsburgh's forward Derick Brassard with his left hand and flicking a backhand by Murray with his right just over 2 minutes later to put New Jersey in front. Just over 90 seconds later, the Devils pushed their lead to 3-1 when Hischier flipped a centring pass into an open net.

Though Pittsburgh stormed back, the Penguins couldn't quite win for the sixth time this season when trailing after two periods.

"We're aware of (their quickness), but if we play in their end it's hard for them to sue their speed," Crosby said. "We had success in the first and third period and that's how we have to play."

NOTES: New Jersey F Miles Wood missed his second straight game with an upper-body injury. ... Penguins D Justin Schultz's 400th NHL game included a trip to the trainer's room when he slammed into the boards in the third period, though Sullivan said afterward Schultz was fine. ... Hall (81 points) is the first New Jersey player to reach the 80-point plateau since Ilya Kovalchuk in 2011-12. ... Pittsburgh F Dominik Simon played 5:39 in his return after sitting out six games with a lower-body injury. ... Linesman Tony Sericolo left early in the first period with an injury, but returned at the start of the second.

Penguins: Go for the season sweep of cross-state rival Philadelphia when the Flyers visit Sunday. The Penguins won the first three meetings by a combined score of 15-7.