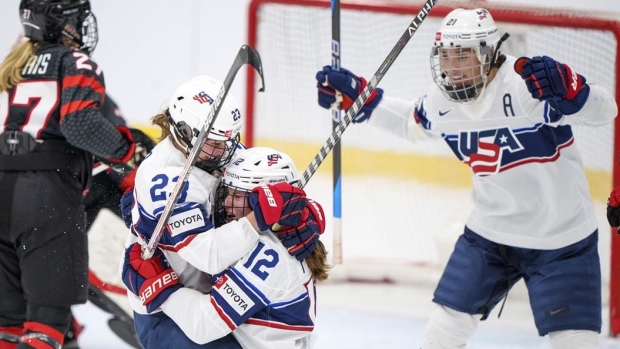 HERNING — The U.S. won the latest battle in its women's hockey tug of war with Canada.

Megan Keller had a goal and an assist and Hilary Knight moved closer to the all-time world championship points record in a 5-2 win over Canada to cap the preliminary round on Tuesday.

Trailing 2-0 after the opening period, the U.S. scored five unanswered goals against the defending champions with Lacey Eden producing the winner at 3:14 of the third period.

The Americans ended Canada's run of wins against them at five straight — including the most recent world and Olympic finals — with their biggest margin of victory over the Canadians since a 4-1 win Dec. 14, 2019.

"For us, it doesn't really matter what happened in the past," U.S. forward Kelly Pannek said.

"This game, the score is what it is, but how we worked and how we got those goals, we got down, but our mentality was never down. We never were out of the game mentality.

"We stuck together. I think that is more important than getting five goals. It's the way we did it."

The U.S. went unbeaten in four games to top Pool A, which featured the top five seeds in the tournament.

The Americans take on Hungary, the No. 3 seed in Pool B, in a quarterfinal matchup Thursday.

Canada, with three wins and a loss, meets Pool B runner-up Sweden.

In Thursday's other quarterfinals, Finland takes on Czechia, which went undefeated to top Pool B, while Switzerland and Japan square off as the fourth and fifth seeds in Pool A.

U.S. captain Kendall Coyne Schofield's insurance goal in the third period was her first of the tournament.

Knight's empty-netter was her 85th career world championship point and one back of the record held by Canada's Hayley Wickenheiser.

With three goals and two assists in four games in Denmark, Knight vaulted over Canada's Jayna Hefford to move into second in the all-time points table.

Sarah Fillier and Ella Shelton scored for the Canadians, who didn't generate as many scoring chances from close range as the Americans and were often muscled off the puck by the U.S.

"I don't think it was necessarily inside the dots. We were losing battles along the wall against them," Canadian head coach Troy Ryan said.

"We've got to be better along the wall to get pucks inside the dots."

Canada downed the U.S. 5-1 in the preliminary round in last year's world championship in Calgary before edging the Americans 3-2 in overtime in the final.

"We lost so it's going to be how we handle that loss, that's going to determine success moving forward."

"Every time you lose against the U.S., it's always a sting," Canadian captain Marie-Philip Poulin said.

"No time to panic for us. It's a game. It's part of the process. It's never going to be perfect. It's just a matter of us being resilient."

Savannah Harmon threaded a cross-ice pass under a Canadian stick to Eden, who wired the puck top shelf for the go-ahead goal in the third.

The Canadians couldn't produce an equalizer on a subsequent power play with Coyne Schofield serving a boarding minor.

Schofield then scored her team's fourth goal on a tip-in from the slot at 13:28.

"Lacey had a heck of a shot. Skill play, but the trench work ultimately wins you games," U.S. coach John Wroblewski said.

"I was very happy for our captain to score down in that area. Great storyline for us to have her be the one to give us that two-goal lead, which was obviously massive."

Canada outshot the U.S. 16-8 in the second period, but the Americans scored twice to pull even.

After a Jessie Eldridge tip deflected off Hensley's left post, the U.S. scored on its subsequent rush with Pannek redirecting a Cayla Barnes shot at 11:11.

The Americans halved a two-goal deficit with a power-play goal at 4:16.

The puck cycled out to Keller, and her shot deflected off Canadian defender Ashton Bell and by Maschmeyer.

With Pannek serving a roughing minor, Shelton flipped the puck over a prone Hensley during a goalmouth scramble for a power-play goal at 18:12 of the first period.

Fillier spun and banged in a rebound off a Renata Fast shot from the point at 3:29 for her team-leading fourth goal of the tournament.

With two wins and two losses, Finland ranked third in Pool A with a 4-0 win Tuesday over short-staffed Switzerland (1-3-0-0).

The Swiss were minus five players, including four with illness.

The Swiss hockey federation said on its website that captain Lara Stalder had tested positive for COVID-19, and the other three negative.

"Knowing that there are some cases in the tournament, it was an easy decision for us to do the right thing and put our masks on," Schofield said.

Czechia blanked Sweden 3-0 to go undefeated atop Pool B, five points up on the runner-up Swedes.

Germany secured the fourth and final playoff berth in the pool with a 3-2 victory over host Denmark.

This report by The Canadian Press was first published Aug. 30, 2022.

Note to readers: This story reflects a scoring change at source that removes an assist for Hilary Knight.