The National Hockey League has spent the better part of seven weeks trying to structure a potential return-to-action plan. While most of the attention has been on the remnants of the regular season and what a reworked playoff format would look like, recent interest has shifted to the upcoming entry draft.

The league, perhaps more and more aware that the sport’s on-ice return may still be a ways out, has started to focus on the draft and draft lottery. There is no doubt that the NHL was paying close attention to the NFL’s draft last week – a major success story that saw a whopping 15.6 million people tune in for just the first round.

Recent reports indicate that the league is strongly considering conducting the draft sometime in June, which would predate this year’s Stanley Cup – assuming postseason hockey is still played.

Because the NHL is considering both revamping and expanding the playoff format on a one-time only basis, concerns have grown about the (exceptionally small) odds of a team winning both the draft lottery and the Stanley Cup. That has prompted the league to consider changing the structure of the draft lottery, despite the fact that the vast majority of the regular season has been played.

If you read the details of the report, one potential revision to the lottery rules stands out: the league would pick just one winner, drawing for the top spot only, with those odds likely determined by regular season points percentage.

Couple that single draw with a couple of important conditions:

In other words: a boon for the teams lucky enough – or bad enough – to tank this season away, and it comes at the cost of the second-tier teams who won’t really get a bite at the proverbial apple.

Under this scenario, only five teams will have a shot at Rimouski’s Alexis Lafreniere (four when you consider that Ottawa owns San Jose’s pick), and players like Sudbury’s Quinton Byfield, Mannheim’s Tim Stutzle, or Erie’s Jamie Drysdale will be similarly difficult to land.

How does the math work out? Well, let’s look at the draft lottery odds under normal circumstances. As you can see, each team has a weighted chance (proportional to where they finished): 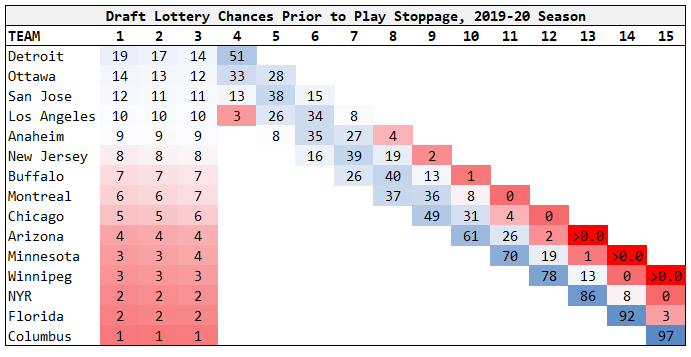 I’m going to draw two teams into focus for a moment so you can understand how significant the shift is with the proposed changes.

Fourth-place Los Angeles could land in any number of spots – they hold about a 10 per cent chance of drawing any of the top three spots, and also carry some risk of sliding further in the draft (the Kings actually held a two-in-three chance of sliding into the five-to-seven range based on the old format).

Now, let’s re-do the math with just one ball being drawn for the top spot. How does that impact the likelihood of where a team may land? Well, let’s do the math one more time.

In the case of Detroit and Los Angeles again, we see what we would expect. Detroit’s odds taken together do not change – they have the same 19 per cent odds of their ball being drawn, plus another 38 per cent chance of any team not named Ottawa, San Jose, Los Angeles, or Anaheim winning. Detroit’s cumulative probability at first overall, then, is 57 per cent.

The theme of the rule change is straightforward: it is beneficial to teams at the very top due to the first-overall odds and their inability to slide more than one spot. The trade-off is that teams in the lower tiers of the draft lottery are increasingly likely to hold their current spot, or slide one spot back.

Now, we wait to see if the plan gets traction league-wide.