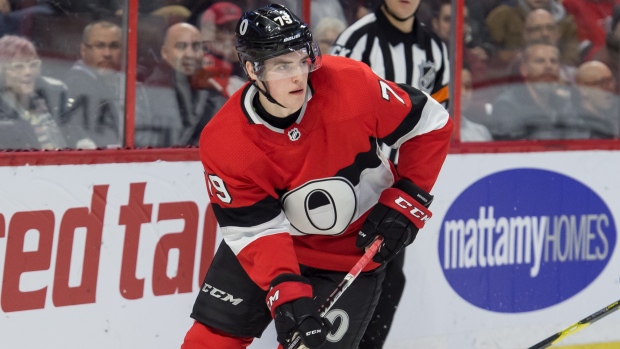 The Ottawa Senators have re-assigned forwards Drake Batherson and Josh Norris to the Belleville Senators, the team announced on Sunday morning.

Batherson has been between the Sens and the AHL Belleville team for the past two seasons. This year, he played a total of 23 games for the Sens and recorded three goals and an NHL career high of seven assists. For Belleville, he's recorded 14 goals and 32 assists this season. Batherson also played for Team Canada in the 2018 IIHF U20 World Junior Championship where he scored a total of seven goals and helped bring home a gold medal for the team.

For Josh Norris, this was his first season playing with the Sens. Prior to being called up, he played 51 games for Belleville where he scored 30 goals and made 28 assists. Norris has also played for Team U.S. in the past where he helped them win bronze in the 2018 IIHF World Junior Championship and silver in 2019.

The New Jersey Devils have signed Julian Melchiori to an NHL contract for the rest of the season.

NEWS: The #NJDevils have signed defenseman Julian Melchiori to an NHL contract for the rest of the 2019-20 season.https://t.co/I3rU0xXyO3

Melchiori has had 30 games of NHL experience with the Winnipeg Jets between 2013-2017. This season he's been playing in the AHL for Binghamton where he's recorded five goals and eight assists.

The St. Louis Blues have placed Oskar Sundqvist and Alex Pietrangelo in tonight's lineup against the Minnesota Wild. Tyler Bozak will be out tonight and is day to day.

Sundqvist is in tonight, Bozak out. Not quite ready. Bozak is day to day. Pietrangelo is in. #stlblues

Sundqvist has played 48 games for the Blues this season. He's registered 11 goals, 10 assists, and a plus-2 rating.

Bozak has been ruled out of tonight's game. He suffered a lower-body injury in Thursday's game against the Arizona Coyotes and will be day to day. Bozak has played in 60 of the Blues' games this season and has posted 12 goals, 15 assists, and a plus-3 rating. This is Bozak's second season with the team and his 11th season in the NHL.

The Dallas Stars have recalled Taylor Fedun from Texas.

NEWS: Defenseman Taylor Fedun has been recalled from the @TexasStars.#GoStars https://t.co/hdCEIKX5qg

Fedun was assigned to the Texas Stars on a conditioning assignment where he played five games. Before being sent down on assignment, the 31-year-old defenseman recorded nine points and a plus-3 rating for Dallas.

Belpedio has 18 points and a plus-five rating with the Iowa Wild this season. He has played three games for Minnesota in the past where he recorded two assists.

Mayhew has played seven games for Minnesota this season where he scored two goals. Prior to being called up, he recorded 61 points and a plus-17 rating for Iowa.

Forward Luke Kunin and defenseman Carson Soucy is also expected to miss the next couple of games due to injury.

Kunin suffered an upper-body injury in the first period of Friday's game against the Edmonton Oilers. Prior to his injury, he played 59 games this season where he's recorded 27 points.

Similar to Kunin, Soucy also sustained an upper-body injury in Friday's game against the Oilers. This season, he's played 55 games and has recorded 14 points and a plus-16 rating.

Korpisalo was placed on assignment with the Monsters after he suffered a knee injury in the Dec. 29 game against the Chicago Blackhawks. Before his injury, the 25-year-old goaltender was having one of the best seasons of his career. He set a career high in wins, shutouts, and had a .913 save percentage.

With Korpisalo being recalled, Kivlenieks and Thurkauf have been sent down to the Monsters. Kivlenieks played in four games with the Blue Jackets where he had a .907 save percentage. For Thurkauf, he played in one game with the team where he was able to record a hit in his NHL debut Saturday.

The Vegas Golden Knights have recalled forward Patrick Brown from the Chicago Wolves.

Brown has 28 games of NHL experience with the Carolina Hurricanes where he has posted two points. This season, Brown has been playing for the Wolves where he has recorded 19 points.

Defenseman Shayne Gostisbehere has been recalled by the Philadelphia Flyers.

Gostisbehere played 41 games and recorded 12 points for the Flyers before he was placed on his conditioning stint. He played two games with the AHL team. This is Gostisbehere's sixth season with the Flyers.

The New York Islanders have recalled Kieffer Bellows from the Bridgeport Sound Tigers and have sent down Andrew Ladd.

#Isles Transactions: Andrew Ladd has been returned on loan to Bridgeport. Kieffer Bellows has been recalled from loan.

Bellows made his NHL debut this year with the Islanders. In the seven games he played, he scored two goals and made an assist. During his time with Bridgeport, he played 45 games where he scored 16 goals and made eight assists.

The Arizona Coyotes have recalled Darcy Kuemper from the Tucson Roadrunners.

Kuemper was assigned to the Roadrunners for a conditioning assignment after he suffered a lower-body injury on Dec. 19. Prior to his injury, he played 25 games where he went 15-8-2. He also recorded a 0.929 save percentage.

The Canes have recalled goaltender Alex Nedeljkovic and Anton Forsberg from the Charlotte Checkers.

This comes after the Canes lost James Reimer and Petr Mrazek in the first period of last night's game against the Toronto Maple Leafs.

Nedeljkovic has played two games for the Canes in the past where he averaged a 0.953 save percentage. Currently, he's averaging a 0.905 save percentage with the Checkers and is 15-10-2.

Forsberg has played for the Columbus Blue Jackets and Chicago Blackhawks in the past, giving him 45 games of NHL experience where he averaged a 0.901 save percentage. With the Checkers, he's averaging a 0.905 save percentage and is 15-9-2.

K. Poulin is cleared from yesterday after signing with the Kings' organization.