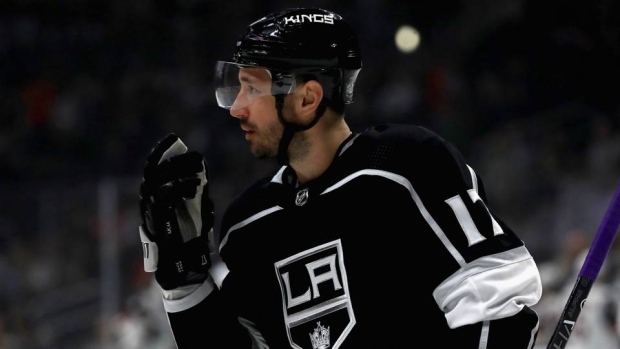 Ilya Kovalchuk cleared unconditional waivers on Tuesday, allowing the Los Angeles Kings to terminate his contract and make him an unrestricted free agent.

The move ends a month-long standoff between the two sides, with Kovalchuk last appearing in a game on Nov. 9. The 36-year-old continued to skate and travel with the Kings before leaving the team on Monday.

According to TSN Hockey Insider Pierre LeBrun, Kovalchuk's agent J.P. Baryy will begin the process of meeting with teams on Tuesday afternoon.

The last step in the process was receiving the official termination letter from the Kings, which the Kovalchuk camp now have in hand. As for talks with other NHL teams, none yet but plan is for agent J.P. Barry to start that process this afternoon.

Kovalchuk received the final signing bonus in his contract on Sunday - for $2.65 million - and has only a salary of $700,000 remaining for this season. He will, however, continue to count against the Kings' salary cap at a hit of $6.25 million through next season.

With Kovalchuk's contract still counting against the cap, the Kings have a total of $9.76 million in dead cap this season, with Dion Phaneuf's buyout ($2.19 million through 2022-23) and Mike Richards' cap recapture penalty ($1.32 million through this season).