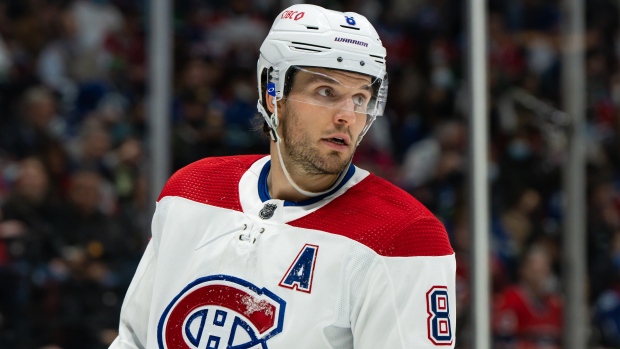 The TSN Hockey Insiders discuss trade talks escalating for Ben Chiarot, why the Habs and Wild could be a trade fit, the Leafs being among the teams showing interest in Sharks defenceman Jacob Middleton, why Toronto could make more than one move ahead of the deadline, whether Andrew Copp's future in Winnipeg could be down to days, and much more.

The first defenceman domino falls with Josh Manson being traded from Anaheim to Colorado and here we go Pierre, Ben Chiarot being held out of the lineup by Montreal against Arizona. How close are the Habs to making a deal?

Pierre LeBrun: Well I would tell you James, that the Josh Manson deal from my perspective, it sounds like really intensified some of those conversations that were already happening between the Montreal Canadiens and a pretty long list of suitors.  Among the teams that we believe still have interest includes Calgary, Carolina, Florida, St. Louis and others.  The Flames have a prospect by the name of Jakob Pelletier that is of great interest to the Canadiens. I just don’t know if the Flames …don’t think they want to move him.  The Hurricanes don’t have a first-round pick; you may remember they used that in an offer sheet on Jesperi Kotkaniemi, so can they lure the Habs with a prospect or two? St. Louis doesn’t want to pay the price of a first-round pick, which is the price, so can they find another way? So, all these things are happening here as the Habs keep to their high price on Ben Chiarot.

Darren Dreger: I would say that the Minnesota Wild also have interest in Ben Chiarot, but like many teams around the NHL, the Wild do not like the asking price on Chiarot.  In the meantime, you’ve got the Montreal Canadiens and the Wild continuing to discuss 6-foot-3 college centre Jack McBain from Boston College.  Now, McBain has made it clear to the Wild, he is not going to sign with them, so he could become an unrestricted free agent in August.  The asking price for Jack McBain is a second-round pick and that does not scare the Montreal Canadiens, provided that they, or another team that acquires his rights, can get him signed.

Pierre, last week you reported interest in Sharks defenceman Jacob Middleton.  Is it a possibility that a number of Atlantic Division teams are in pursuit

LeBrun: Atlantic and Eastern Conference in general, but yeah, a number of playoff teams from the East continue to check in with San Jose on Jacob Middleton. The price is right, $725,000 is his cap hit, he’s had a wonderful year, he’s a great story, he was signed to an AHL deal by San Jose and this year he’s played a Top-4 role alongside Erik Karlsson, alongside Brent Burns. Here is the asking price from San Jose as I know it: a second-round pick, plus another pick or a prospect in that package, pretty high price similar to the Josh Manson deal. The Toronto Maple Leafs are among the Eastern Conference teams that I’m told have checked in on Jacob Middleton. I think the Leafs have some interest, all kinds of reasons why his physicality on the left side would be of use to Toronto. Boston and Tampa also in there, I believe.

Chris Johnston: Toronto’s interest there is a reminder every day is a new day, because it was just a week and a half ago that Kyle Dubas said to the reporters that he felt that he just had room for one move at the deadline, to add one player and I don’t believe that’s any longer the case. And look, a lot has played out for the Leafs in the last 10 days, obviously Jack Campbell has gone with injury, they’ve had some trouble at that position and my sources suggest the Leafs are still looking at upgrades at all three positions in their lineup. To make any of this money work of course, they’re going to have to trade someone off their roster if they do make multiple additions, but that does seem to be at least a possibility here with six days to the deadline.

A lot of decisions have to be made over the next, just under a week.  Does that include Winnipeg on Andrew Copp?

Dreger: Yeah, because the Winnipeg Jets are still in the playoff mix, so Kevin Cheveldayoff and the Jets are going to have to make that decision obviously before three o’clock eastern on Monday. Now, Copp is out of the lineup for precautionary reasons, but health isn’t a big concern to Copp or the Winnipeg Jets, they expect he will be back in the lineup on Friday, so what do you do? Do you hold him as an own rental and let him potentially walk, leave the organization for free at the end of the season or do you take what you can get at the trade deadline? I know Colorado, the New York Rangers and the Boston Bruins are among those with interest.

Colorado is the most active team early on this week, and CJ, that Nico Sturm for Tyson Jost deal, what does it mean for what may happen next for Colorado?

Johnston: Well the Avalanche got physically bigger with the additions of Sturm and Josh Manson and they’ve left room here to add a big name still before Monday’s deadline and I think the most interesting aspect of the deal they made Tuesday is the fact that they did shed salary. Tyson Jost was due to earn a little bit more than $1.2 million more than Sturm and they’ve put themselves in a position now where they can get in the bidding on Claude Giroux, should Giroux ultimately waive his no-move clause to go to Colorado. So at this stage there is no indication that is his preferred destination, but the Avalanche are lurking and waiting and looking to make an addition up their forward ranks.

Joe Sakic, we appreciate the energy, timing off a little bit on those first couple of deals, but as CJ says, still plenty of time and perhaps a big one coming.