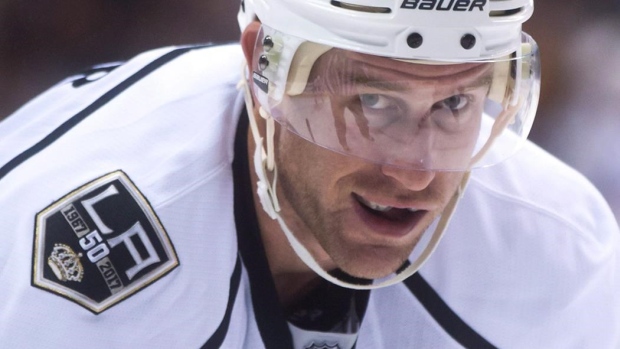 Sitting last in the NHL, the Los Angeles Kings are expected to begin a roster overhaul to insert more youth into the team's aging roster before the trade deadline.

One veteran who could be on the move for Los Angeles is two-time Stanley Cup champion Jeff Carter. However, TSN Hockey Insider Bob McKenzie said Thursday that trading Carter could be a gamble for the acquiring team, and the Kings.

"One of those veteran players the Kings have that could be attractive to teams looking for offence is Jeff Carter, the 33-year-old centre/winger who has the ability to put the puck in the net," McKenzie said on Insider Trading.  "Whether it’s Boston or Arizona or any of the other teams out there looking for forwards, that might be the type of player that would be of interest to them. Now it’s interesting, he’s got three years left on his contract after this year, $5.27 million cap hit - that’s manageable, even more manageable is the fact that he’s only owed $7 million cash for the final three seasons in one of those old back-diving contracts.

"He doesn’t have no-trade protection, he loves it in L.A. and would love to stay.  If he does get traded somewhere he doesn’t want to go, retirement could be an option for him. That’s why he signed that back-diving contract ­– he’s only leaving $7 million on the table. If he did retire, there is a cap recapture penalty that would hit the LA Kings at $3.75 million in each of the next three years."

Carter's cap hit sits at $5.27 million through 2021-22, but his actual salary will drop from $5 million to $3 million next season and then to just $2 million in the final two years on the deal.

Through 33 games this season, Carter has six goals and 15 points while averaging 18:41 of ice time.

A veteran of 936 career games, Carter has been traded twice before; from the Philadelphia Flyers to the Columbus Blue Jackets in 2011, and from the Blue Jackets to the Kings eight months later.

TSN Hockey Insider Pierre LeBrun added Thursday that Drew Doughty and Anze Kopitar appear to be the only untouchables on the Kings roster.

"I don’t know about 'Lose for (Jack) Hughes' but certainly I think they are realistic," LeBrun said of the Kings. "GM Rob Blake understands what lies ahead here, it’s going to be painful with some tough decisions. Certainly Drew Doughty and Anze Kopitar aren’t going anywhere, those guys are going to live through this rebuild or retooling of the L.A. Kings over the next couple of years, but otherwise I think Rob Blake is certainly all ears. What does that mean for goalie Jonathan Quick? I don’t know if anyone knows for sure.

"I don’t believe the Kings are shopping him, but I’ve also had teams telling me they are sniffing around that situation, so I really think it depends on the offer as he does not have a no-trade clause.  Beyond that, defenceman Jake Muzzin, there are other veteran players. The bottom line is the Kings have to turn this roster over, they have to get younger."

Quick, 32, is signed for four more seasons at a $5.8 million cap hit, while Muzzin, 29, carries a cap hit of $4 million and will become a free agent after next season.