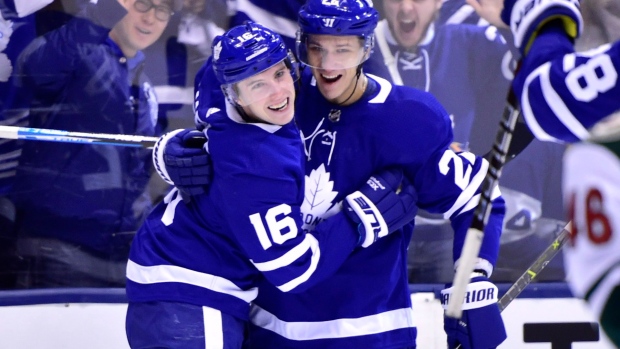 BUFFALO – While the Toronto Maple Leafs work urgently to keep pending restricted free agent winger Mitch Marner in the fold with a new contract extension, top-four defenceman Nikita Zaitsev has unexpectedly expressed he wants out of his deal.

Zaitsev still has five years remaining on a seven-year, $31.5 million contract, making news of his trade request due to “personal reasons” on Thursday, a surprising twist in what’s already been an interesting week for the Leafs.

Just on Tuesday, TSN Hockey Insider Darren Dreger appeared on TSN1050’s Leafs Lunch and reported the Leafs “have had exchanges” with Marner’s agent Darren Ferris in regards to a new deal but not much more has happened ahead of his hitting RFA status on July 1. Dreger said Marner’s camp is already looking at negotiations to go beyond then, and he’d be “shocked” if Marner’s group doesn’t start the visiting process with clubs that might be willing to offer sheet him.

No RFA in NHL history has ever explored that negotiating window before, and if any of the potential upheaval surrounding his club is getting to general manager Kyle Dubas, he didn’t let on in Thursday’s media press conference.

“I’m probably not going to give anybody as much [information as] they’d like,” Dubas said from Keybank Center in Buffalo at the NHL’s Scouting Combine. “The Dreger Café got [Marner’s situation] kicked back up when it landed back in North America, which is fine, but there won’t be anything coming from us.”

Neither will there be much information to come on Zaitsev’s future. Dubas said it would be on Zaitsev and his agent Dan Milstein to reveal his motivations in asking to be moved, and Milstein refused comment to TSN.ca. But given that the 27-year-old Zaitsev is still well under contract, and coming off a season where he averaged the fourth-most minutes per game among Leafs at 20:28, Dubas was clear nothing has been decided just yet on the next steps.

“It’s not any definitive type of ‘he’s definitely not going to be back,’ ” Dubas said. “Especially as the year went on, as he was paired with [Jake] Muzzin, I think his value began to shine through a bit more. His penalty killing, his right shot, he plays in our top-four, and is signed reasonably for a long time. So that’s where that’s at.”

And finding a new home for Zaitsev doesn’t bear the same importance for Toronto as getting Marner’s deal done. When the Leafs’ season ended in another disappointing first-round playoff exit last month, Dubas called signing the 22-year-old forward, preferably before July 1, the club’s top priority.

Asked point-blank on Thursday if he’s still confident an extension will even get done by then, Dubas characterized himself instead as “hopeful. I’m a very optimistic person. I hope that we [will] and we will keep working towards it. I think that is what has been expressed on everybody’s end. If everyone is in on it that way we should be able to get there.”

It’s all very familiar territory for the Leafs, who just last summer were in a similar spot with then-RFA William Nylander. Not until the final minutes before the NHL’s Dec. 1 deadline where players must either sign or miss the entire season did Nylander agree on a six-year, $45 million extension. And then Toronto used up more of its cap space inking another pending RFA, Auston Matthews, to a five-year, $58.17 extension in February.

Dubas saw the error of his ways in dealing with Nylander though, specifically in not initiating conversations with his agent, Lewis Gross, until last June’s NHL draft. This time around, Dubas has been far less passive, engaging Ferris in talks for more than a year.

“It is a totally different situation,” Dubas said. “But with that in mind and learning from that, it is continuing to stay on it and not let it slip. And not let anyone think we’re not wanting to get an agreement done.”

The question is whether Toronto has enough money to entice Marner, a local product from Thornhill, Ont., away from exploring his options. He was their team-leader in points the last two seasons after all, and in 2018-19 set career-highs in points (94), goals (26) and assists (68), playing for the first time on a line centred by John Tavares.

Dreger reported on Tuesday that Toronto’s offer would have to be “aggressive” to get a deal done with Marner by July 1, something in the $11 million per season range, pushing him past Patrick Kane as the highest paid winger in the NHL. At this point, the Leafs have just $8.8 million currently available on the cap for next season, and could add another $4.5 million to that if they trade Zaitsev (although whatever players Toronto received in return would eat into that amount).

Even if a market-setting payout to Marner isn’t one the Leafs can execute, Dubas wouldn’t want his talented forward to be perceived as greedy as this process continues.

“Mitch is a wonderful person and a player, great energy and enthusiasm,” he said. “I’ve told him and I’ve told Darren, he’s the type of player – him, Auston, Morgan [Rielly] – they’re the types of guys that should play their whole career here and roll on. I think that’s what the dream is when you’re with a franchise; you want those players to play their whole careers, especially when they’re core parts of it. And then the rest is history.”

While Dubas remains committed as ever to finding a solution with Marner, he has changed his tune since the end of the season. At that stage, Dubas said the Leafs wouldn’t be finalizing other contracts until Marner’s was complete. But he sees now it’s not realistic to simply stop everything, whether that’s signing other pending RFAs Kasperi Kapanen and Andreas Johnsson or eventually accommodating Zaitsev’s desire to find a new home.

“We can’t hold up the whole operation of our team, either, right?” Dubas said of working with Marner’s camp. “We can’t stop trying to improve our team because one of the three free-agent situations is slow. We’d like to get them all done. At the same time, I don’t think it’s fair to the remainder of the players on the team for us to put everything on hold when we can be trying to improve the club.

“The market has kind of [dictated] where everyone fits in and it’s just trying to work around the edge of that to come to conclusions.”