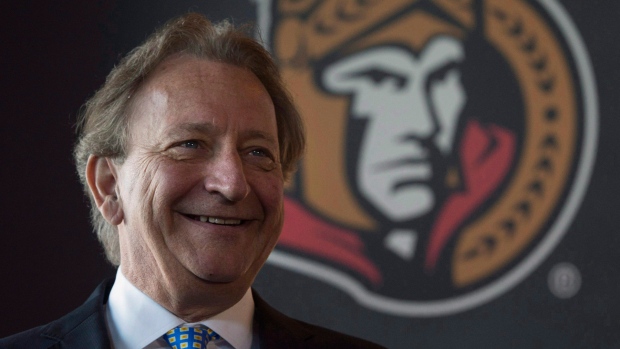 Ottawa Senators owner Eugene Melnyk has died from an illness, the team said Monday night. He was 62.

The team announced Melnyk's death with a statement from his family that mentioned “an illness he faced with determination and courage.” The statement did not explain what the illness was, and a team spokesman did not immediately respond to a message seeking additional details.

It is with great sadness that the family of Eugene Melnyk and the Ottawa Senators hockey organization announce his passing on March 28, 2022 after an illness he faced with determination and courage. https://t.co/MrHsTvu7sz pic.twitter.com/DOZrJcD26e

Mr. Melnyk provided me, my teammates, and many Sens players who came before us with an opportunity to live out our dream. The Ottawa community will miss you greatly. Condolences to your family. https://t.co/lNeXwUDurF

Melnyk had a liver transplant in 2015 after a public campaign for a donor. He had owned the Senators since 2003, when he bought the NHL club for $92 million. Ottawa reached the Stanley Cup Final in 2007, losing in five games to the Anaheim Ducks.

The Toronto native was involved in other businesses around Canada and in 2010 had an estimated net worth of $1.21 billion.

Melnyk bought the Senators after Rod Bryden’s deal to reacquire the franchise was unsuccessful.

“The National Hockey League mourns the passing of Ottawa Senators owner Eugene Melnyk,” NHL Commissioner Gary Bettman said in a statement. “The words ‘passion’ and ‘commitment’ define the man who has owned the Ottawa Senators since 2003.

“While successful in business, it was our game and his Senators that he was most passionate about. Eugene was often outspoken but he maintained an unwavering commitment to the game and his roots and he loved nothing more than donning a Senators sweater and cheering on his beloved team. On behalf of the entire National Hockey League, I extend my deepest sympathies to Eugene’s daughters, Anna and Olivia, his extended family, and all those who benefited from his generosity.”

Senators captain Brady Tkachuk said in a tweet: “Mr. Melnyk provided me, my teammates, and many Sens players who came before us with an opportunity to live out our dream. The Ottawa community will miss you greatly. Condolences to your family.”

In 2013, Melnyk reduced his horse-racing operation and went from breeding to purchasing yearlings and racing those instead. Melnyk was inducted into the Canadian Horse Racing Hall of Fame in 2017.