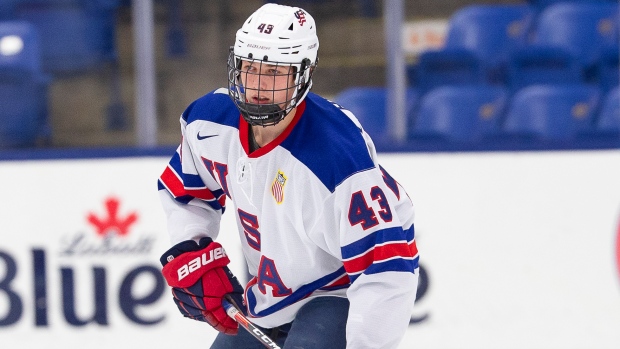 SECAUCUS, N.J. (AP) — When the New Jersey Devils took Luke Hughes with the fourth pick in the NHL draft, brother Jack jumped up off the couch next to him and was shaking with excitement while giving a big bear hug.

“That might be the happiest I’ve ever seen him,” Luke said.

With good reason because they could be teammates one day. Jack Hughes is 117 games into his NHL career since the Devils picked him first in the 2019 draft, and now Luke is on the path to New Jersey.

Luke is the third Hughes brother drafted in the top 10 in the past four years after Quinn went ninth to Vancouver in 2018. Quinn, who was sitting next to Luke and Jack watching the draft together at their family's home in Michigan, said, “The brother dynamic, I’m a little jealous.”

Luke Hughes put on his brother's No. 86 Devils jersey — with the tags still attached — and said he'd like to wear No. 43 if he makes it to the NHL. Jack certainly hopes so.

“It’s a great pick for our team,” he said on the draft broadcast. “We're getting a great player. But I’m just a proud older brother right now.”

Jack Hughes couldn't contain his excitement, popping on to his brother's video interview to say hello to Devils staffers on the call. Luke said having Jack and Quinn as brothers helped get him to this point.

“It’s huge to have them as brothers," he said. “Growing up with them, all the battles we had on the outdoor rink and mini sticks and all that stuff. That’s where we grew our passion and really became little players.”

Luke Hughes is committed to playing at Michigan next season, where he could be teammates with Buffalo No. 1 pick Owen Power if the big defenseman goes back to school. Players from or going to Michigan were taken with four of the first five selections, including Matthew Beniers second to the expansion Seattle Kraken as the first pick in franchise history.

The family connections from the first round did not end with the Hughes brothers.

“To see him have a moment like this, it’s overwhelming," Brian Boucher said. "It’s one thing to happen to you personally. When it happens to your child, it brings out a lot of pride.”

The Blue Jackets were one of the record 12 teams Mike Sillinger played for during his 17 NHL seasons, and Cole was born in Columbus.

“He was very relied upon in all three zones,” he said. “He was relied upon in key situations, whether it was taking the faceoff or needed to get a big penalty kill. That’s something that I really try to model after my game to be really relied upon and trusted by my teammates.”

The Minnesota Wild used their first-round picks to honor late assistant general manager Tom Kurvers, who died last month of lung cancer. GM Bill Guerin called Kurvers someone who had a positive impact on everyone he interacted with.