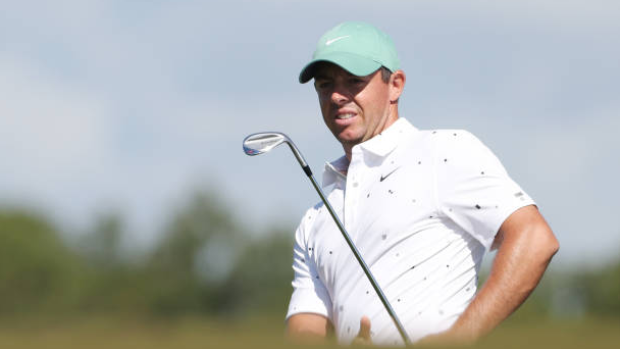 Collin Morikawa tapped in for par to become the champion golfer of the year, and that meant 263 days until the words, “Fore, please,” introduced the next major at Augusta National.

The end of big golf until then? Not quite.

Rory McIlroy indicated as much going into the British Open when asked if the memory of missing the cut at Royal Portrush in his native Northern Ireland still lingered.

“Not really. I ended up winning the FedEx Cup in 2019, so it gave me a few million reasons to feel better," he said with a smile, alluding to the $15 million prize.

More valuable than a major? No. But it's all players have in front of them — not to mention that little exhibition between the U.S. and Europe the last weekend in September.

The FedEx Cup has become increasingly important to players. Dustin Johnson was so irritated not to have won it that he decided at the start of 2020 to skip the Olympics so he could stay fresh for the post-season.

The Olympics were postponed last summer, Johnson won the FedEx Cup, and he wound up skipping a trip to Tokyo this year, anyway.

Johnson is at the 3M Open this week in Minnesota. So is Louis Oosthuizen. They are among six players who gave up their spots in the Olympics and are playing a regular PGA Tour event.

Oosthuizen had said earlier he had family commitments. Sergio Garcia, who played in the last Olympics in Rio de Janeiro, said he wanted to focus on representing Spain in the Ryder Cup.

Some of them might not want any part of an Olympic experience that won't be much of an experience at all with all the restrictions because of the COVID-19 pandemic.

Rickie Fowler wasn't eligible for the Olympics this year, though he has more pressing concerns. He has fallen out of the top 100 in the world again, and he is No. 124 in the FedEx Cup going into the 3M Open. He's not eligible for the final World Golf Championship, so Fowler has two events left to stay in the top 125, unless he decides to add an opposite-field event.

On the Ryder Cup front, Patrick Reed is playing the 3M Open. He missed the cut in the British Open and fell to No. 8 — one spot behind Jordan Spieth. The top six are automatic qualifiers. The points stop after the second post-season event at the BMW Championship.

Reed is No. 22 in the FedEx Cup, and getting into the BMW should be no trouble.

Bandon Dunes appears to have become the home of amateur golf for the USGA, which announced 13 championships at the Oregon resort over the next 23 years.

It starts with the U.S. Junior Amateur next year.

The U.S. Amateur and Women's Amateur will be held at Bandon Dunes in the same year for the first time in history. That will be the case in 2032 and 2041.

Bandon Dunes has five championship courses, which the USGA said makes it ideal to host its championships. In some events, two courses are required for qualifying.

The resort already has hosted seven USGA events (all amateur), dating to the Curtis Cup in 2006 on the Pacific Dunes course. Other Bandon courses previously used in USGA events were Bandon Dunes, Old Macdonald and Bandon Trails.

The Ryder Cup remains on course to have full attendance at Whistling Straits in Wisconsin from Sept. 24-26. But the Junior Ryder Cup will have to wait until next time.

The PGA of America and Ryder Cup Europe said Tuesday it is being cancelled because of ongoing travel problems for the European team and officials. It was supposed to be played Sept. 20-21 at Blue Mound Golf & Country Club.

Meanwhile, the U.S. Junior Ryder Cup team is being invited to Whistling Straits for an exhibition match on Wednesday of Ryder Cup week. The team also will be introduced at the opening ceremony and invited to attend the opening day of matches.

Louis Oosthuizen has now made the cut in 15 consecutive majors he has played, the longest active streak, though it hardly qualifies as a consolation for the heartache from so many close calls without winning.

He was among 14 players to made the cut in all four majors this year, a list that ranges from Jon Rahm (who finished in the top 10 in all four) to Bryson DeChambeau (who failed to crack the top 20 in any of them).

Oosthuizen, Rahm, Lowry and Casey made every major cut for the second straight year.

On the other side was Matt Kuchar, who missed the cut in every major for the second straight year. He last played the weekend at a major in 2019 at Royal Portrush.

The PGA Tour says St. Louis-based World Wide Technology has taken over as title sponsor for the tournament at the Mexican resort of Mayakoba. It will be called the World Wide Technology Championship at Mayakoba, held Nov. 4-7 on the same course (El Camaleon) where it has been played since it began in 2007. The deal is for seven years.

On the PGA Tour Latinoamerica, a new series called “Totalplay Cup” starts next year. It features a points list in which the winner will be eligible for all Korn Ferry Tour events the following year that are full-field tournaments.

Retief Goosen had to withdraw from the Senior British Open at Sunningdale this week because of having close contact with someone with a positive COVID-19 test. That would be his son, Leo, who also was going to caddie for him. ... Louis Oosthuizen at the British Open became the third player in major championship history to post a sub-200 score (198) through 54 holes and not win. The others were Ernie Els (197) at Riviera in the 1995 PGA Championship and Adam Scott (199) at Royal Lytham & St. Annes in the 2012 British Open, won by Els. ... Jon Rahm was the only player to finish in the top 10 at all four majors this year. He has five straight top 10s dating to the Masters last November.

Phil Mickelson at the PGA Championship on May 23 is the last PGA Tour winner to hold at least a share of the 54-hole lead. The last nine winners trailed going into the final round.

“I’m going with one goal and one ambition, and that’s to bring a medal back to Ireland. That’s the only reason I’m going. I’m not going there on my holidays.” — Shane Lowry on the Olympics.