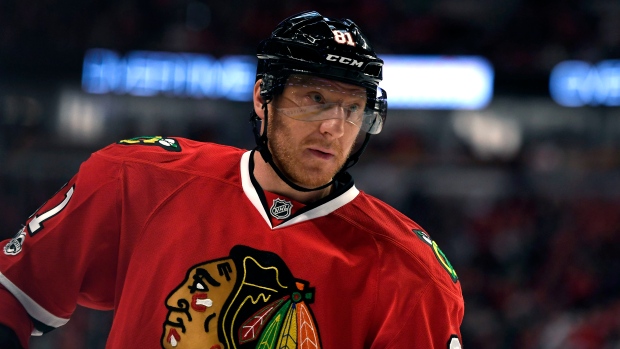 The Chicago Blackhawks announced that Marian Hossa will sign a one-day contract with the team and officially retire as a member of the organization, the team announced on Tuesday. The 43-year-old will officially sign the contract in a special ceremony prior to the team's game on Thursday against the Seattle Kraken.

And you can be there to witness it!

Hossa will put pen to paper at 6:15 pm on Thursday in the Atrium prior to the 7:30 pm game vs the Kraken.
Details ⬇️https://t.co/bV9ZEQfnPD

"The Blackhawks and city of Chicago hold a special place in my heart. Making the commitment to this organization in 2009 was the best decision I ever made. For all the memories my teammates and I made together, including three Stanley Cup wins, my family created just as many off the ice," Hossa said in a statement. "The fans embraced us as one of their own, treating us so kindly wherever we went. Retiring as a Blackhawk is a dream come true and I couldn't imagine officially ending my career in any other way. I would like to thank the Wirtz family for making this a reality and for all they have done for me since I signed with the team."

Hossa won three Stanley Cups with the Blackhawks (2010, 2013, and 2015) during his nine-year tenure with the club. While with Chicago, the Stara Lubovna, Slovakia native recorded 186 goals and 415 points in 534 regular season games. He posted 21 goals and 73 points in 107 playoff games.

"To me, the greatest free agent signing in Chicago sports history, Marian was the franchise's missing piece. Both on, and off the ice, he made an indelible mark on his teammates and our organization," said Blackhawks CEO Danny Wirtz. "My family is forever grateful for the contributions Marian made to the Blackhawks. His humble demeanor and vaunted work ethic was everything we could have asked for and more in a superstar when we signed him in 2009. We feel that it's only fitting that Marian retire as a Blackhawk as he starts a new chapter in his life."

Hossa was a first-ballot inductee to the Hockey Hall of Fame in 2020 after 19 seasons in the NHL. In 1,309 games with the Blackhawks, Ottawa Senators, Atlanta Thrashers, Pittsburgh Penguins, and Detroit Red Wings, he posted 525 goals and 1,134 points. He was selected to the NHL All-Star game five times.