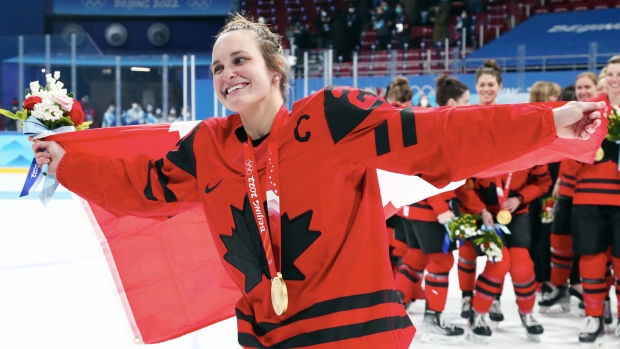 Marie-Philip Poulin has no plans to join the ECHL after leading Canada's women's hockey team to a gold medal in Beijing.

Poulin had two goals, including the game-winner, Thursday as Canada beat the United States in the championship game.

Marc-Andre Bergeron, general manager of the ECHL's Trois-Rivières Lions, told the newspaper Le Nouvelliste on Friday that he was interested in signing Canada's captain.

Momentum Hockey, the agency that represents Poulin, quickly shot down the idea, releasing a statement in French on Saturday that said Poulin has no intentions of joining the team.

The statement says the 30-year-old from Beauceville, Que., has dedicated her career to advancing and developing women's hockey, and will continue working toward creating a women's league.

It thanked the Lions for recognizing Poulin's "exceptional talent" and invited the team to join her and hundreds of other players who are working to promote women's hockey in Canada.

This report by The Canadian Press was first published Feb. 19, 2022.