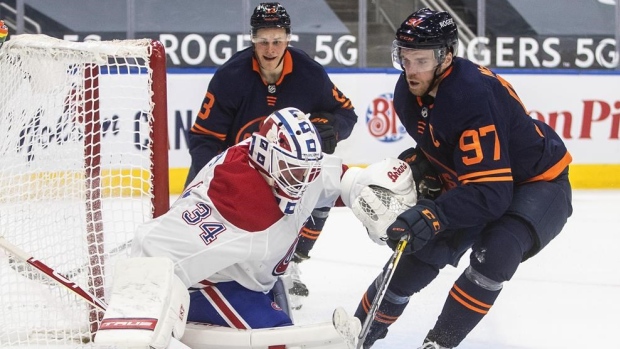 EDMONTON — With a burst of his world-class speed, Connor McDavid finally solved the Montreal Canadiens in 2021.

And his Oilers were more than willing to answer the bell in a physical, playoff-style matchup.

The NHL's leading scorer buried the winner with under five minutes to go in regulation Monday on a jaw-dropping individual effort as Edmonton defeated Montreal 4-1.

After the Oilers tied the game 1-1 midway through the third period, McDavid collected a loose puck at his own blue line, burst through the neutral zone and split Canadiens defencemen Jeff Petry and Joel Edmundson before beating Jake Allen to add another incredible highlight-reel effort to his ever-expanding resume.

"I'm never really afraid to take on two defenders," McDavid said. "It can get me into trouble sometimes."

It didn't on this occasion for McDavid, who along with Leon Draisaitl had been limited to four combined assists against Montreal in 17 1/2 periods before setting up Ethan Bear's equalizer that opened the floodgates on a three-point night.

Jesse Puljujarvi, with a goal and an assist, and Devin Shore, into an empty net, also scored for Edmonton (27-15-2), while Mike Smith made 22 saves. The Oilers, who picked up an eighth straight home win and improved to 2-3-1 against the Canadiens, moved to within one point of the Winnipeg Jets for second place in the North Division with a game in hand.

"That's a team that's had our number for whatever reason this year," McDavid said. "It's a big win for our group."

The visitors tried to take the body against the Oilers — especially early — but Edmonton didn't back down in game that featured 67 total hits.

"They're a big team," McDavid said. "We're not afraid to play that type of way. If you want to play physical, we can play physical."

Eric Staal replied for Montreal (19-15-9), which got 25 saves from Jake Allen after he replaced Carey Price to start the second period. The Canadiens fell to 2-6-0 over their last eight games without injured winger Brendan Gallagher (broken thumb) and could once again be without their No. 1 goalie.

Price, who stopped seven shots in the opening 20 minutes, left with an upper-body injury following a bump by Oilers forward Alex Chiasson on McDavid's disallowed goal in the first. The former Hart and Vezina trophy winner had just returned to the lineup in Saturday's 4-0 loss at home to the Ottawa Senators after missing six games with a lower-body ailment.

The Canadiens opened a five-game road trip that will see them back at Rogers Place on Wednesday before three crucial outings in Calgary against the Flames, who are chasing Montreal for the division's fourth and final playoff spot.

Edmonton tied the game 1-1 at 10:49 of the third on Bear's one-timer off a McDavid feed on the heels of some great pressure in the offensive zone for his first of the season.

McDavid then pushed his team ahead with 4:49 left when he collected the puck at Edmonton's blue line and did his thing to score his 24th in what seemed like the blink of an eye.

"We did a good job taking away his time and space early on," Petry said. "They were able to tie the game up and their momentum took over. Down the stretch games are going to be tight.

"Whether we're up a goal or down a goal, we have to make sure we're mature in our game and not stray away from it."

Puljujarvi scored his 11th to make it 3-1 with 2:23 remaining on a breakaway after being sent in alone by McDavid before Shore iced it into an empty net with his fifth.

"It's frustrating," said Ducharme, whose team has scored just 18 times over its last 10 contests. "But at the same time, we did a lot of good things."

Montreal went up 1-0 at 6:46 of the second when Corey Perry threw a pass in front that hit Staal's right skate and past Smith for his fifth, and second since being acquired from the Buffalo Sabres in late March.

The 36-year-old's only other goal with Montreal came in overtime against Edmonton in his debut April 5.

Edmonton's best chance of the period came right after an Oilers penalty kill, but McDavid saw the puck roll off his stick on a 2-on-0 with Puljujarvi off a terrific long-distance aerial feed from Smith.

Montreal survived an Oilers man advantage to start the third before Chiasson chipped a shot over the net from in tight after Allen made the initial save.

The Canadiens backup then stood his ground on a diving Josh Archibald chance before Bear brought the teams level with his first goal in 49 games.

"That's the kind of hockey we're going to have down the stretch," Bear said. "Everyone's trying to push for the playoffs.

"We've had some tough losses this year. It's tested our character. We're maturing as a group."

Both sides came out hitting in a spirited first, with Montreal defenceman Alexander Romanov sending a woozy Jujhar Khaira to the Edmonton locker-room following a huge mid-ice collision.

The Oilers appeared to take the lead at 12:01 when McDavid snapped a shot upstairs, but Montreal correctly challenged for goaltender interference on Price.

Smith stopped Staal on a 2-on-1 rush with the blocker before Montreal's power play — 2 for 31 over its last nine games coming into Monday — got a chance later in the period, but Jesperi Kotkaniemi fired over Smith's goal with the netminder at his mercy.

"It was a tight, playoff-style game," Edmonton head coach Dave Tippett said. "I liked the way we stayed with it and got the win."

Notes: Following the conclusion of this two-game set, the Oilers and Canadiens will play twice more in the regular season — May 10 and 12 in Montreal. ... Tippett said before the game Ryan Nugent-Hopkins (upper-body injury) is expected to practise with the team Tuesday. The centre was hurt April 7 in Ottawa.

This report by The Canadian Press was first published April 19, 2021.