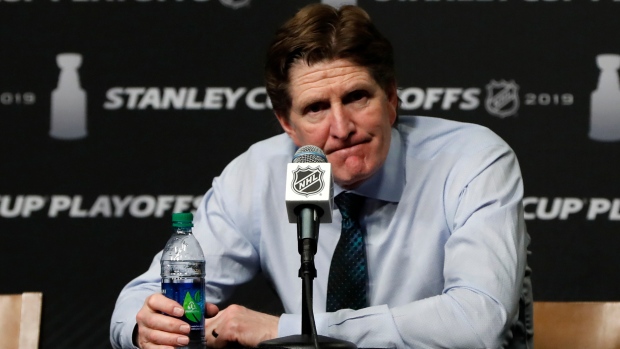 The university's chief athletics officer Dave Hardy announced Saturday that Babcock will lead the Huskies on a full-time volunteer basis for the next two seasons.

Babcock joins the Huskies after spending the past 17 seasons in the NHL, including guiding the Red Wings to the Stanley Cup championship in 2008.

He also coached Anaheim and Toronto. Babcock was fired 23 games into the 2019-20 season while in his fifth campaign with the Maple Leafs.

Babcock coached Canada to Olympic gold medals in men's hockey in 2010 and 2014, and was also behind the bench for Canada's 1997 world junior championship and world title in 2004.

"I am excited to work with Huskie athletes, back in my hometown, at the university where I had the opportunity to play under legendary coach Dave King," Babcock said in a statement.

"This is a special place for me, and I look forward to having the chance to help develop these young men. Saskatchewan has provided me many opportunities in my life and my career, and I am truly excited about the opportunity to give back."

It marks a return to Canadian university hockey for Babcock.

He coached the University of Lethbridge Pronghorns to the national men's title in 1994.

In his book "Leave No Doubt,'' Babcock wrote that after he was fired from one coaching job, he accepted an offer to coach the Pronghorns in 1993 instead of working for a consulting firm.

``I'm not sure anybody would have looked at me in 1993, as I began my stint as the head coach of the University of Lethbridge, and figured me for a good bet to be the head coach of Canada's hockey team at the 2010 Olympics in Vancouver,'' Babcock wrote.

"Then again, if you put yourself out there, if you take a risk and face your doubt, good things can start to happen.''

After being fired by the Leafs, Babcock came under fire late last year for tactics in handling players. He recently joined NBC Sports as a studio analyst for NHL games.

This report by The Canadian Press was first published Feb. 20, 2021.