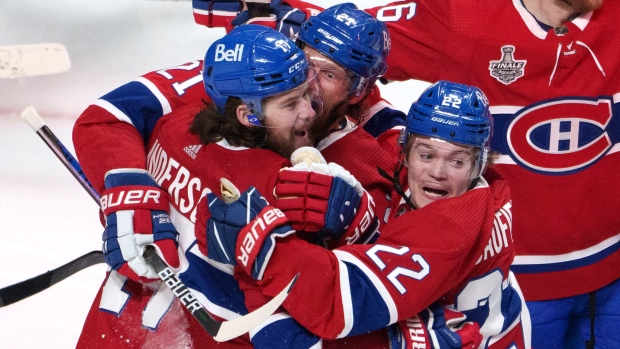 MONTREAL — Josh Anderson provided the rallying cry with his team down 3-0 in the Stanley Cup final.

"Everyone's going to be ready ... I can tell you that," Montreal's powerful, bruising winger stated emphatically to close out his press conference ahead of Game 4.

"We're not finished yet."

Then he went out and delivered to help keep the Canadiens' magical, improbable playoff run alive.

Anderson scored his second goal of the night at 3:57 of overtime Monday as Montreal defeated the Tampa Bay Lightning 3-2 to stave off elimination and cut its deficit in the NHL's title series to 3-1.

After the Canadiens survived a four-minute power play that stretched from the end of regulation into the extra period thanks to some superb penalty killing and a couple of big stops from Carey Price, Anderson bull-rushed his way into the offensive zone and tried to slip a pass to Cole Caufield.

Lightning defenceman Jan Rutta forced Anderson to the end boards, but he stayed with the play and popped back out front to pounce on a loose puck and bury his fifth goal of the playoffs to ensure Montreal is still breathing.

"We didn't want to end it tonight in front of our fans," said Anderson, one of the Canadiens' big off-season acquisitions. "Just had that feeling that we were going to win."

"I wasn't really sure if it did go in," added the 27-year-old, who tumbled to the ice as he chopped the puck into Tampa's net. "Looked at the refs hands and saw a bunch of people coming to me."

Alexander Romanov also scored for Montreal, which got 32 saves from Price in a bounce-back performance after the former Vezina and Hart Trophy winner — a big reason by the Canadiens are in the final — put up a meagre .835 save percentage through the first three games against Tampa. Caufield added two assists.

"A resilient group," Price said of his team. "We faced adversity all season long and have responded well.

Game 5 of the best-of-seven matchup is set for Wednesday in Tampa. Game 6, if necessary, would be back in Montreal on Friday.

"That was a close game overall," Lightning defenceman Victor Hedman said. "They were playing for their lives and they really brought it.

"They're here for a reason ... recharge our batteries and get ready for next game."

Tampa is aiming to repeat as champions and claim the franchise's third Cup, while the Canadiens took the first step towards matching the 1942 Toronto Maple Leafs as the only teams in NHL history to battle back from down 0-3 in the final to hoist hockey's holy grail.

Montreal is also trying for its 25th Cup — and Canada's first — since the franchise's last title in 1993. The Canadiens improved to 8-1 all-time when facing elimination on home ice in the final.

"We understood the hole that we were in," Montreal winger Brendan Gallagher said. "But we just kind of talked about it — find a way to win one game here, really simplify your mindset.

"It's going to be the same thing next game."

Inserted into the lineup with the Canadiens looking for a spark, Romanov scored the first playoff goal of his career in the rookie's third post-season game at 8:48 of the third period to give Montreal a 2-1 lead and send the 3,500 fans at the Bell Centre — and many more in the streets outside the arena — into a frenzy.

But Maroon tied it off the rush exactly five minutes later at 13:48 with his second on a 2-on-1 with Mathieu Joseph.

Playoff scoring leader Nikita Kucherov had a great chance at the side of Price's net late in regulation, but couldn't find the range with the series and Cup on his stick.

Montreal captain Shea Weber was assessed that double-minor for high-sticking with 1:01 left on the clock, and had to wait nervously as the Canadiens survived the first minute of the man advantage to force OT.

Price then made a couple big saves in the extra period to kill off the penalty before Anderson won it.

"Our penalty kill has been outstanding all playoffs," he said. "We did a phenomenal job. Carey was a wall tonight and gave us that chance to finish it.

The Canadiens shook things up facing elimination by dressing centre Jake Evans for Jesperi Kotkaniemi, and Romanov and fellow defenceman Brett Kulak for Jon Merrill and Erik Gustafsson on the blue line, while interim head coach Dominique Ducharme mixed up three of his four lines in search of a spark.

With Hall of Famers Yvon Cournoyer, Guy LaFleur and Patrick Roy looking on from a private suite, Tampa flew out of the starting blocks, while Montreal was stuck in neutral for most of the opening period.

The Lightning led 8-0 on the shot clock before the Canadiens forced Vasilevskiy into a save, but made the most of their second effort on target.

Caufield and Nick Suzuki worked a slick give-and-go before the latter feathered a pass from below the goal line to Anderson for him to pot his fourth at 15:39 and give Montreal its first lead of the series with the shot clock reading 11-2 for the visitors.

The Canadiens nearly scored on the very next shift off a scramble in front of Vasilevskiy, but were fortunate to be up 1-0 through 20 minutes after Brayden Point wired a shot off the post on a late Lightning power play.

Montreal survived a Corey Perry infraction and another on Joel Armia in the second, but Hedman came close on a shot that beat Price only to clank off the iron.

The Lightning would finally get level with 2:40 left on a great sequence by Ryan McDonagh. The blue-liner disrupted Jeff Petry's outlet pass and then moved down low to collect Blake Coleman's rebound and find Goodrow in front on a behind-the-back feed to score his second.

While there's still a steep mountain to climb, adversity and the Canadiens have gone hand-in-hand this season. They endured a coaching change, COVID-19 outbreak, key injuries and long losing streaks to qualify as the last club to make the playoffs with the NHL's 18th-best record.

Montreal sat as massive underdog against the Leafs, Winnipeg Jets and Vegas Golden Knights in the first three rounds, but found a way at every turn through a combination of outstanding goaltending, grit, determination, and some good fortune.

The Canadiens used that exact formula to keep their season going.

"We've kind of been through this already in the first round against Toronto," said Gallagher, whose team came back from 3-1 stun the Leafs in seven games.

"Hopefully you get to fight one more day."

They earned that right in Game 4.

This report by The Canadian Press was first published July 5, 2021.