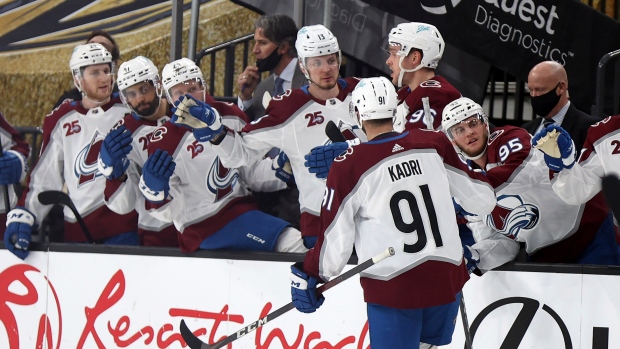 LAS VEGAS — Nazem Kadri scored with 41 seconds remaining in the third period, lifting the Colorado Avalanche to a 3-2 win over the Vegas Golden Knights on Tuesday night.

Moments after Marc-Andre Fleury stopped Mikko Rantanen’s backhand with 45.3 seconds left, the Avalanche — who rank ninth in the league in faceoff win percentage (52.0%) — got the better end of a faceoff from the right circle, eventually setting up Kadri, who was able to lift a loose puck into the net for his second game-winner of the season.

“We just tried to keep it simple,” Kadri said. “Told the D-men to get the puck and we hopped on the rebound.”

Grubauer, who led all goaltenders with six wins in the month of January, is tied for third with eight wins this season, ranks fourth with a 1.64 goals-against average among netminders with at least four starts, and sixth in save percentage (.936).

“He’s the backbone,” Kadri added. “He’s essentially driving the bus for us. We have all the confidence in the world in him. We’re doing the best we can to play in front of him. That’s what we need in order to contend.”

Max Pacioretty and Jonathan Marchessault scored for the Golden Knights. Fleury made 22 saves in his fifth straight start while Robin Lehner remains out with an undisclosed upper body injury.

The teams split the first two of four games during a nine-day stretch, with the third scheduled for Lake Tahoe on Saturday in an outdoor setting.

Despite suffering just its third loss in regulation, Vegas (10-3-1) remained in first place in the West Division with 21 points. Colorado (8-4-1) is in third place with 17 points.

MacKinnon scored just his second career goal in 10 games against Golden Knights, his first inside Vegas’ T-Mobile Arena, when he one-timed Mikko Rantanen’s pass to the slot past Fleury.

As they did in the first of the teams’ four games, a 1-0 loss on Sunday, the Avalanche looked to be the more efficient team at both ends, controlling the tempo and outshooting the Knights 9-7 in the first period, even after going the final 6:03 without a shot.

“I think we knew it was coming,” Golden Knights defenceman Alec Martinez said of Colorado’s speed. “They did the same thing the other night. We probably handled it a little better the other night than we did tonight. We have to do a better job of taking away their time and space.”

Vegas, meanwhile, struggled to find its rhythm, with chemistry being disrupted by untimely penalties and skating six of the first 20 minutes short-handed.

Pacioretty, who scored Vegas’ lone goal in the first meeting, tied the game from his familiar place on the ice, firing a wrist shot from the top of the right circle. It was the fifth time in its last eight games Vegas scored at least one power-play goal.

Saad answered 63 seconds later, skating in front of the crease from the bottom of the left circle and slipping a backhand through Fleury’s pads to give Colorado a one-goal lead again.

With Grubauer flat on his stomach and facing the post, Marchessault knotted the game at 2-all in the third period, when he flipped a backhand through three Avalanche players to the top of the net. It was only the second 5-on-5 goal for Vegas over a whopping 229 minutes, 53 seconds, spanning five games.

MacKinnon has recorded at least one shot in 232 consecutive regular-season games, the longest streak in franchise history.

MAKAR BACK, SORT OF

Colorado’s Cale Makar returned to the ice for warmups but was a scratch for the game. Avalanche coach Jared Bednar said after morning skate the defenceman remains “day-to-day (and) technically is still a gametime decision. ... He’s close.”

Fleury remains two wins shy of his 100th as a member of the Golden Knights and is now four games from tying Gump Worsley for 12th all-time with 860 games played.

Colorado has scored the first goal of the game in 10 of its 13 contests this season (76.9%), the highest percentage of scoring first in the league. The Avs are 7-2-1 when lighting the lamp first.

The teams play the third of their four-game set at Lake Tahoe on Saturday, before playing the finale in Denver on Feb. 22.