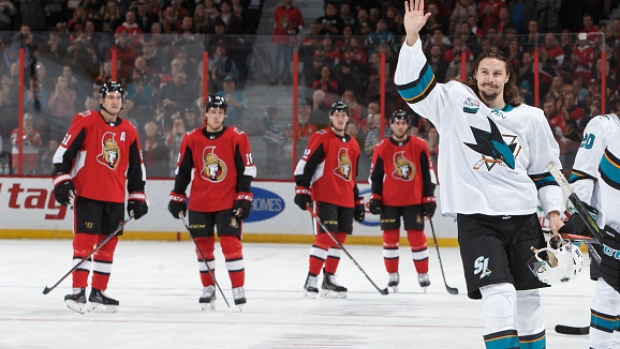 Just one year after being traded to the San Jose Sharks, Don Brennan of the Ottawa Sun suggests Erik Karlsson may be willing to return to the Ottawa Senators this summer.

Citing a "well-connected source," Brennan writes Karlsson is hopeful to receive competitive offers from the Senators and Montreal Canadiens since his wife Melinda, who is from Ottawa, would like to move closer to home. Brennan notes that while Toronto and Buffalo are also close to Ottawa, the Maple Leafs and Sabres are not believed to be on Karlsson's list.

Brennan adds that the New York Rangers are expected to be line for Karlsson's services ahead of July 1 and are just a short flight from Ottawa, while the Sharks, Tampa Bay Lightning and Colorado Avalanche have also been linked to the defenceman, but may be too far from Ottawa to convince him to sign. Brennan believes the Canadiens aren't a fit for Karlsson since they have right-hand shots Shea Weber and Jeff Petry already under contract.

The 29-year-old was acquired by the Sharks in September and tallied 45 points (three goals, 42 assists) in 53 games this season, his first with San Jose. He spent the first 10 seasons of his career with the Senators, who selected him 15th overall in the 2008 NHL Draft.

Karlsson, who turned down an eight-year contract extension from the Senators last July, would only eligible to sign a seven-year deal with any team other than the Sharks this summer.

Ken Wiebe of The Winnipeg Sun chalks up recent speculation that star sniper Patrik Laine could pursue an offer sheet this summer simply as a case of posturing from Laine's camp.

Wiebe believes Laine is likely looking for a long-term contract with roughly a $10 million average annual value, but adds that it is simply too early to panic over the possibility of negotiations with the Jets going sour. He suggests the Jets would be more comfortable paying Laine $8 million to $9 million, but wonders if the team would be wary of reducing the term for a lower cap hit and risk having Laine walk out of his next deal into unrestricted free agency.

The 21-year-old's production dropped off in 2018-19 from his previous two seasons. He scored 30 goals and posted 50 points in 82 games after reaching 44 goals and 70 points in his sophomore season.

Wiebe also writes that the Jets need to find a second-line centre to help Laine reach his maximum potential or commit to playing the Finnish winger with either Mark Scheifele or Blake Wheeler. The Jets, who have $57 million committed to 14 players for next season, traded pending free agent centre Kevin Hayes to the Philadelphia Flyers on Monday and have $25 million in cap space (on a projected $83 million cap) with seven restricted free agents - including Laine and Kyle Connor - to sign.

David Schoen of The Las Vegas Review-Journal suggests that William Karlsson could become an offer sheet target this off-season with the Golden Knights strapped for cap space.

Schoen believes Karlsson will be looking for a $6.5 million cap hit on his next deal, but wonders if the Carolina Hurricanes or Ottawa Senators could entice him to sign an offer sheet with an offer above $7 million that the Golden Knights would struggle to match. He points out that both teams have plenty of cap space and the Hurricanes are loaded with draft picks over the next two years. He adds the Minnesota Wild, Detroit Red Wings and Philadelphia Flyers could also be potential fits, but are unlikely to swoop in.

Karlsson did not match his 43 goals from 2017-18 this past season, but still managed to post 24 goals and 56 points as the Vegas Golden Knights top-line centre.

The Golden Knights are currently over the projected $83 million cap for next season and are expected to try to clear space this month.

As Schoen points out, Karlsson will be unable to sign an offer sheet if he files for arbitration before the July 5 deadline. The compensation for an offer sheet between $6.3-$8.4 million would be a first, second and third-round pick.

Johansson, 28, scored one goal and added two assists in 10 regular-season games upon joining the Bruins from New Jersey Devils, who he had 12 goals and 27 points with in 48 games. LeBrun notes his spike in production in the post-season (four goals and 11 points in 19 games) has also peaked the interest of teams around the league.

“That would be great,’’ Backstrom told LeBrun for an article in The Athletic. “Especially if they go all the way now, too. So many things come with winning. That experience you get with going through it. You want to do it again. So every time you get a player of that calibre it’s only a good thing for teams. I wouldn’t mind if that happens.’’

Devils general manager Ray Shero, who traded a second- and third-round pick to acquire Johansson from the Capitals in 2017, also kept the door open for a return.

Johansson is in the final season of a three-year, $13.75 million contract and carries a $4.85 million cap hit. He was acquired by the Bruins in February for a second-round pick this year and a third-round pick in 2020.